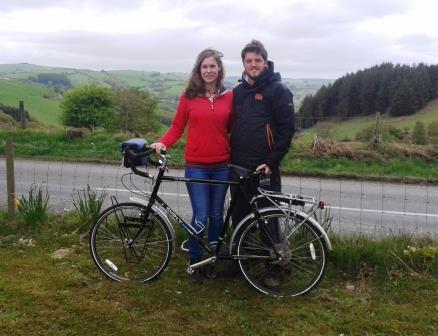 After watching a documentary about cycling around the world, Darren Lloyd has been on a mission to create his own cycling adventure.  In June, Darren sets off on a global cycle tour, raising awareness and money for World Land Trust (WLT) as he goes.

After two years of extensive planning and preparation, the greatest adventure of his life is about to start. The journey spans five continents and may take several years, but Darren is in no hurry. “I see the bicycle as the perfect vehicle on which to explore our planet, travelling at a slow enough pace not to miss out on the cool stuff,” he told WLT.

Darren is raising money for WLT because he believes in the Trust’s approach to conservation. He explains: “Although the Trust raises funds for land purchase overseas, the management and ultimate ownership is with the appointed local conservation partner. I think this is a really important aspect of conservation and if it is done correctly, is the most effective way to conserve threatened habitats.” He plans to visit some WLT project areas on his travels.

An ecology graduate, Darren fell in love with traveling after a gap year in Australia. He has had several jobs in conservation, including a period in Tenerife with the Atlantic Whale Federation. Darren will be setting off on Thursday 11 June 2015 with his girlfriend Izzy. To record the adventure, Darren has created a website, Cycle2Conserve.

You can sponsor Darren by visiting his JustGiving page »

Find out more about becoming an individual fundraiser »