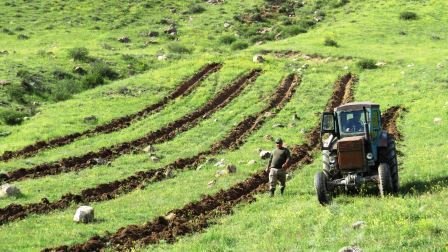 Funds from World Land Trust (WLT) have saved two areas of mountain habitat to extend the Caucasus Wildlife Refuge, which is owned and managed by the Foundation for the Preservation of Wildlife and Cultural Assets (FPWC).

The larger of the two pieces of land measures some 247 acres (100 hectares). The other is 14 acres (5.6 hectares), near the village of Urtsadzor. Prior to the purchase of the smaller plot, FPWC leased the property and opened an eco-training centre there in 2014.

Ruben Khachatryan, FPWC’s founder, described the importance of purchasing the land and FPWC’s partnership with WLT: “This area has unique value for Armenia’s biodiversity as it is a part of a migration corridor for the Caucasian Leopard (Panthera pardus saxicolor). As a typical post-soviet country, Armenia is still facing problems with illegal hunting and this approach has to be totally eradicated. FPWC is the only ambassador of WLT’s values in the Southern Caucasus, having adopted its main conservation principles and taken on the challenge of taking immediate action for the preservation of Earth’s unique wildlife.”

As well as providing funds to extend the Caucasus Wildlife Refuge, WLT has donated trail cameras to FPWC and supports four rangers through the Keepers of the Wild programme.

Hunting is common in Armenia, and regular patrols by rangers are essential to protect Bezoar Goats (Capra aegagrus), which roam across the mountainous terrain. FPWC’s rangers are also active in the local community, delivering education and awareness raising programmes, accompanying visitors and coordinating volunteers.

The success of FPWC’s site protection measures are evident from the growing archive of wildlife images captured by 10 trail cameras installed in 2014.

The most frequently recorded animals in the six month period to May 2015 were huge male Bezoar Goats in big herds. Remote images also show Caucasian Lynx (Lynx lynx dinikii), which was first sighted in the reserve in 2015, along with hares and badgers (the lynx’s favourite prey).

Other predators recorded include wolves and wild cat (the latter included in the Red Data book of Armenia as endangered, new finding 2015). A trail camera also recorded a Syrian Brown Bear (Ursus arctos syriacus) in March, after the end of its winter hibernation period.

FPWC staff are now using the database of trail camera images to create maps of the wildlife populations in the reserve, the distribution of carnivores, omnivores and predator-prey relationships. This is an excellent way to evaluate the presence of wildlife in the reserve and assists greatly in identifying the best camera locations.

In 2014, thanks in part to WLT’s efforts, FPWC won a grant of €30,000 (£25,000) from the European Outdoor Conservation Association (EOCA). The grant has enabled FPWC staff to carry out a comprehensive tree planting programme as well as improving facilities for tourists.

In 2015, tree planting in the Caucasus Wildlife Refuge started in April and volunteers celebrated Earth Day on 22 April 2015 with a concerted tree planting effort. By May a total of 1,000 wild fruit species had been planted – wild cherry, wild peach, wild apple and wild apricot – along with 1,500 buckthorns. Another 1,500 trees, grown from seed and still in the nursery, will be planted in autumn 2015.

The climate in the Caucasus is one of extremes, with hot dry summers and exceptionally cold winters. Thanks to the EOCA grant, FPWC has installed pipework to drip irrigate newly planted trees through the summer.

Also thanks to EOCA, FPWC staff have installed 20 signposts and eight interpretation panels along five recreational trails in the reserve in order to encourage horseback riding, off-road, hiking, birdwatching and cultural tours. A small camping area has also been established.

The Caucasus Wildlife Refuge lies in the South Caucasus on the south-western slopes of the Geghama Mountains, south east of Armenia’s capital Yerevan. The region is home to a wealth of wildlife including the Caucasian Leopard, Brown Bear, Grey Wolf and Bezoar Goat. Many of the species found in the Caucasus are endangered and found nowhere else on Earth.

You can support conservation in Armenia by donating to Save the Caucasian Leopard or by supporting WLT’s Keepers of the Wild programme.