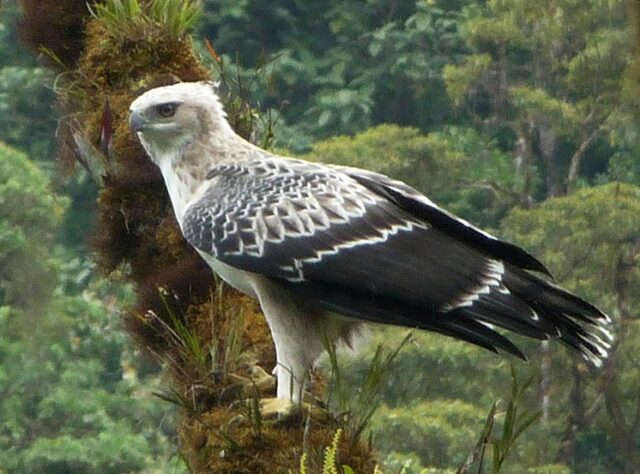 Keeper of the Wild Fausto Recalde has discovered a Black-and-chestnut Eagle nest high in the tree tops of Río Zuñac Reserve.

The reserve is supported by World Land Trust (WLT) and owned and managed by Fundación Ecominga, one of WLT’s four conservation partners in Ecuador.

Classified as Endangered on the IUCN Red List, the Black-and-chestnut Eagle (Spizaetus isidori) is one of Ecuador’s most majestic and most threatened birds. Only a handful of nests of this species have ever been found anywhere, so this is an important discovery.

After years of frequent sightings of the Black-and-chestnut Eagle in EcoMinga’s reserves, to find a nest in one of the reserves is a conservation breakthrough.

Lou Jost, founder of EcoMinga, expressed his excitement at the find: “The nest is easily accessible, very close to the spot where, a few years ago, we took famous ornithologist Robert Ridgely to view this species. On that day we saw a gigantic individual soaring on broad wings quite close to us. We imagined it nested far away in the steep mountains. We never in our wildest dreams could have guessed that it would now nest right there near our little observation shelter, on the edge of an old pasture. What luck!”

EcoMinga staff are planning to install cameras to record goings on in the nest and to learn more about the eagle’s diet. It is known to bring monkeys, squirrels and big birds to its nest, so there may be some dramatic scenes ahead.

Since 2011, WLT has been funding the employment of rangers to monitor and protect Ecominga’s reserves. You can support ongoing conservation and species protection in the reserves by donating to WLT’s Keepers of the Wild appeal.