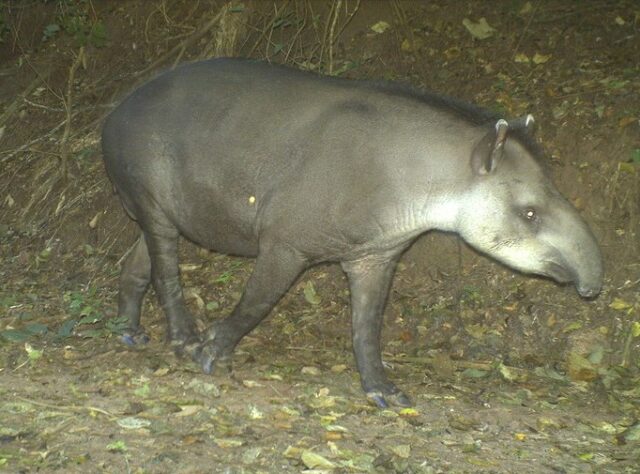 “The Yungas region must be protected,” said Obdulio Menghi, President of Fundación Biodiversidad-Argentina (FBA) during a recent visit to the Suffolk office of World Land Trust (WLT). “It is on a par with other great ecoregions of South America including Amazonia, Selva Paranaense and the Chaco.”

WLT is currently working with FBA to purchase a property in the Yungas region of northern Argentina, El Pantanoso, which is one of the few remaining habitats for Jaguar in Argentina. WLT’s supporters can help save the property by making a donation to the Big Cat Appeal.

The property is strategically important because it forms a corridor between Calilegua National Park on its southern border and Estancia Urundel, a large tract of contiguous forest on its northern border.

Obdulio is constantly amazed by the range of wildlife at El Pantanoso. Trail camera records indicate that there are at least six individual Jaguars moving through the reserve, as well as Puma, Ocelot, Jaguarundi, Margay and Pampas Cat.

He told us: “El Pantanoso is a laboratory open to the sky, a biologist’s dream. We don’t know what we will discover there!”

“At my age I am looking towards a wonderful sunset, and my sunset is to have the El Pantanoso project achieved with World Land Trust.” Obdulio Menghi

The property lies in a transitional zone between the Andean highlands and the eastern forests. The climate is rainy, humid and warm and the rugged and varied terrain has been formed by fluvial valleys and mountain streams.

“The biodiversity is unimaginable,” he said, “and we don’t even know how many ecosystems we have there.”

El Pantanoso is largely unexplored, incorporating several ecosystems at varying altitudes across an area of nearly 5,000 hectares, and new discoveries are likely.

The vegetation comprises jungle foothills and mountain forests and the ancient evergreen forests of the Yungas are thought to be forest remnants dating from the quaternary glaciation.

The rich biodiversity of the property is partly explained by its remote location. Vehicular access is all but impossible during the summer months when heavy rains flood local roads. But during the Argentine winter FBA staff have been making fortnightly visits to check the property. Obdulio himself has been there five times and there are signs that FBA’s regular patrols are deterring squatters and preventing illegal logging.

In the long term, FBA aims to have a permanent presence on the reserve and to enter into an agreement with Calilegua National Park to retain a permanent ranger.

FBA has plans to construct an education centre in a hamlet at the junction of River Pantanoso and River Las Piedras. The NGO is also planning to work with residents of a nearby village (some 85 families). The intention is to encourage local people to develop ecotourism and an understanding of the value of the forest in terms of biology and the conservation economy and how it affects their livelihood.

Saving El Pantanoso is a major project requiring funds of some £800,000 but Obdulio is confident that the money can be raised. He told WLT staff: “At my age I am looking towards a wonderful sunset, and my sunset is to have the El Pantanoso project achieved with World Land Trust.”

A biologist with postgraduate degrees at the University of Geneva and other major European universities, Obdulio has had a long career in international conservation. On retiring from the post of Chief Scientist at the United Nations Environment Programme, he set up FBA in 2000. Obdulio visited to WLT’s office in Halesworth on 2-4 March 2015.

FBA is one of WLT’s three conservation partners in Argentina and played a key role in WLT’s project to conserve the Emerald Green Corridor of Misiones province in north eastern Argentina. He also spoke about Misiones when he visited the WLT offices in March. Find out more »

WLT is raising funds to purchase and protect El Pantanoso through the Big Cat Appeal.