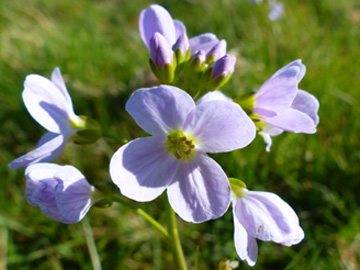 A group of 25 enjoyed a guided tour to Kites Hill on a beautiful spring morning in April.

Kites Hill Nature Reserve is the only nature reserve owned by World Land Trust (WLT), and it is the Trust’s only conservation project in the UK.

Andy Pearson was among the visitors. He said after the event: “My thanks to all for an excellent, educational day – a real eye-opener! It was great to meet Bill Oddie too – I’ve been a fan for longer than I, or he, would care to admit!” Andy plans to revisit the reserve as part of a Severnside Ramblers event in July.

The walk was part of Thornbury Arts Festival. The previous evening Bill Oddie and Sarah Class (another WLT Ambassador) performed A Musical Safari in the Armstrong Hall, on the opening night of the festival.

At the end of the walk, Shirley Sharp, chair of Thornbury Arts Festival, presented Bill with a bottle of champagne to thank him for his support for the festival. Walkers took advantage of the knowledge on offer, with WLT Volunteer Peter Foster able to advise on the conservation aspects of organic farming, Bill identifying bird calls and Dan Freeman giving information about the site, its management for conservation and how it came to be donated to WLT by Jane Pointer in 1999.

In the meadows the warm spring sunshine highlighted flowers such as Cowslips (Primula veris), an iconic but now rare meadow species, and Ladies Smock (Cardamine pratensis), also known as Cuckoo Flower because its appearance coincides with the arrival of the first cuckoo.

During the walk the group saw Common Buzzard (Buteo buteo) and Sparrowhawk (Accipiter nisus) circled overhead, and Blackcap (Sylvia atricapilla) were heard in the trees.

Kites Hill was bequeathed to the Trust as a living legacy by Jane Pointer in 1999.

WLT manages the conservation of the reserve in partnership with The Conservation Volunteers (Gloucestershire branch). The reserve is open all year round.

More about leaving a legacy to WLT »