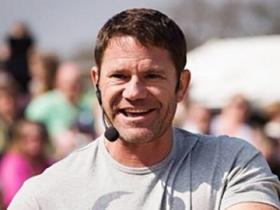 A donation of £2,000 from luxury treehouse designer Blue Forest has pushed Steve Backshall’s fundraising total to more than £42,000.

Steve is kayak racing from Devizes to Westminster over the Easter weekend to raise funds for World Land Trust (WLT).

“We are very excited to be supporting Steve Backshall. He is taking on an extreme challenge for a great cause and we wish him all the very best for the Devizes Westminster race,” said Simon Payne, Director of Blue Forest.

Based in Sussex, Blue Forest is an award winning company that specialises in the design and construction of treehouses and sustainable buildings. Earlier in the year Blue Forest launched a tree house poster competition in conjunction with Sevenoaks School, another WLT supporter.

On Saturday 4 April, Steve and his team mate George Barnicoat will be kayaking 125 miles from Devizes in Wiltshire along the Kennet and Avon Canal and the River Thames arriving in Westminster the following morning. They aim to complete the course in approximately 20 hours.

Thanks to match funding from a WLT Council member and corporate supporter Maidenhead Aquatics, donations to sponsor Steve’s fundraising challenge up to £22,500 will be doubled.

In a recent programme on BBC Radio Suffolk, Steve told interviewer Lesley Dolphin: “I would love to reach £50,000, that would be my dream.”

WLT will be holding a supporter rally at Westminster on the morning of Sunday 5 April. An ebay auction of Steve’s T-shirts opens on Thursday 2 April and closes on Sunday 12 April at 11am.

All funds raised will go towards WLT’s conservation projects in the Chocó rainforest of Colombia.