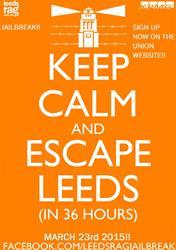 Two groups of students from Leeds University are making a ‘jail break’ on 23 March 2015 to raise money for World Land Trust (WLT).

The jail break is a sponsored hitchhike that involves getting as far from Leeds as possible in 36 hours without spending any money.

Dani, Rach and Sophia are raising funds for WLT because they are concerned about the loss of biodiversity. Biology students Izzy and Edie have also formed a team to raise funds for conservation, something they feel strongly about.

On a previous jail break for charity, students from Leeds University travelled as far as southern Spain. In 2015 the target destination is India. “We are aiming big! India sounds pretty good,” said Izzy and Edie.

The two teams together have raised more than £500 so far. You can support both teams by visiting their fundraising pages.

Are you looking for a challenge in 2015? WLT website has plenty of tips for individual fundraisers who want to go out of their way to raise funds for the Trust. Visit our individual supporter fundraising page »