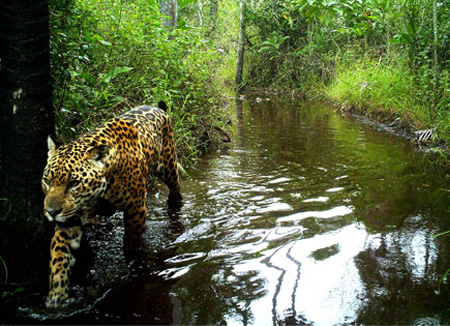 Guyra Paraguay has collected more than 1,000 files from remote cameras in the Chaco-Pantanal thanks to a grant of almost £5,000 from People’s Trust for Endangered Species (PTES).

Guyra Paraguay is a conservation partner of World Land Trust (WLT), and the cameras have been installed along trails in the Three Giants Biological Station, which was created with funding from WLT.

The purpose of the grant is to enable Guyra Paraguay to conduct a comprehensive study of Jaguars (Panthera onca) and other mammals using camera traps.

To keep them safe from inundation, the cameras have been positioned in elevated areas of the reserve, which has seen an unusual level of flooding over the past year. The floods have restricted the area of ground that can be monitored and the research area will be extended when the floodwater recedes.

The research project is designed to provide estimations of the Jaguar population and information about the movements of identifiable individuals.

The data is in the process of being analysed. So far, the trail cameras have recorded Jaguar, Jaguarundi, Ocelot, Crab-eating Fox and Maned Wolf as well as species of tapir, deer and peccary.

Despite setbacks due to flooding, the researchers working on the project have been greatly encouraged by the recent announcement that an image of a Jaguar at Three Giants has won the overall prize in the World Land Trust International Trail Camera Competition in association with The Times. The winning image was recorded by Guyra Paraguay prior to the grant and shows one of the flooded paths in the reserve.

Marianela Velilla is Species Conservation Programme Manager for Guyra Paraguay. She said: “We are thrilled to receive this award and it definitively serves as an inspiration to all of us to keep on working at our station, even under harsh conditions. The award is particularly important to the rangers, since they are the ones who are always on the ground; it is a privilege and something to be proud of.”

When Guyra Paraguay staff received the image back in 2014, they were stunned by it. Marianela describes its significance: “It is the best picture we have taken so far with camera traps. It not only shows a beautiful Jaguar but it also reflects the reality of the ecosystem: flooding is always present and the people as well as the animals have learnt to adapt to this condition.”

People’s Trust for Endangered Species provides grants for research to help conservationists better understand how to protect the world’s endangered species. Projects are designed to enable conservationists to use the data inform management plans and education programmes plans. In Paraguay deforestation poses the greatest threat to Jaguar habitat.

World Land Trust supports conservation in Paraguay through the Keepers of the Wild Programme.