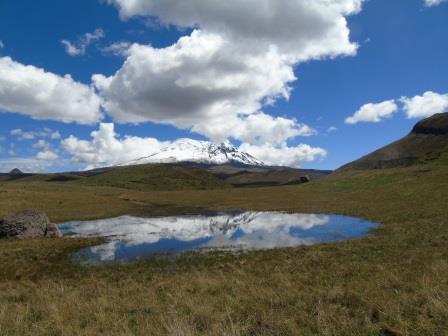 World Land Trust (WLT) is urgently calling for votes to help a conservation project win a grant of £25,000.

The project to monitor threatened Andean Condors and restore wetlands in Antisanilla Biological Reserve, Ecuador, is competing against four other projects in an online poll.

In 2014 another project backed by WLT romped to victory with more than 7,000 people voting for an initiative to conserve the Caucasian Leopard in Armenia. This year the Andean Condor project is up against tough competition from Red Pandas in Nepal and Yellow-Shouldered Amazon Parrots in Bonaire.

Earlier in the week the WLT condor project was third in the rankings but it has now moved up into second place, ahead of the parrots but behind the pandas.

So, if you haven’t yet voted, please do so! It’ll take just a couple of clicks and costs nothing. A vote for this project really will help Andean Condors in Antisanilla, which is home to around half of Ecuador’s Andean Condor population.

Click the Vote Now button on the right and you will be directed to the voting page of the EOCA website. The Andean Condor project is at the top of the list.

To cast your vote, first click the button next to the Andean Condors, then tick the box at the bottom of the page to accept the terms and conditions. Finally click the cast your vote button. Acknowledgement of the vote will then appear in red at the top of the page.

The Andean Condor and wetland restoration project has been developed by Fundación Jocotoco (FJ), one of WLT’s four conservation partners in Ecuador.

FJ board member Hernan Vargas has recently confirmed that the movements of five Andean Condors in the area of Antisanilla are now being tracked via satellite transmitters, and a further two condors have been wing tagged.

The Andean Condor is classed as Threatened by IUCN and its population is in decline in Ecuador. The species is the subject of human persecution because farmers believe they prey on livestock (infact, as a member of the vulture family, the condors only feed on carrion).

An incident that took place least year illustrates the risks faced by Andean Condors in Ecuador: a tagged condor known as Felipe was found shot dead less than a year after being reintroduced to the wild.

Find out more about World Land Trust’s work in Ecuador »