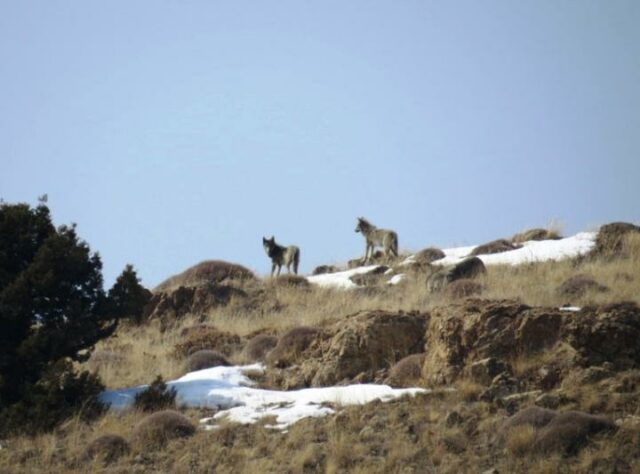 A remote camera has captured close-up film footage of a pack of Grey Wolves (Canis lupus) following a snowy trail through the Caucasus Mountains.

The film was recorded in the Caucasus Wildlife Refuge (CWR) which is owned and managed by the Armenian conservation partner of World Land Trust (WLT), Foundation for the Preservation of Wildlife and Cultural Assets (FPWC).

Because Grey Wolves are at the top of the food chain their presence in the wild indicates a healthy ecosystem. This is because for Grey Wolves to survive they need large herbivorous mammals to prey on. In the CWR herds of Bezoar Goats (Capra aegagrus aegagrus) are now plentiful thanks to protection measures carried out by FPWC and supported by WLT.

Once the world’s most widely distributed mammal, Grey Wolves are now confined to remote mountain areas such as the Caucasus. Grey Wolves do not attack people, but they will prey on domestic livestock if there is no wild substitute. For this reason they are subject to human persecution.

FPWC’s trail cameras have been successfully recording some of Europe’s most scarcely seen mammals in recent years. Many of the cameras have been donated by WLT or funded by the European Outdoor Conservation Association.

Some of the species caught on film by FPWC include Caucasian Lynx (Lynx lynx dinniki), Syrian Brown Bear (Ursus arctos syriacus) and Caucasian Leopard (Panthera pardus saxicolor), which was recently the subject of a WLT special appeal.

WLT provides ongoing support for FPWC’s conservation in the Caucasus through the successful Keepers of the Wild programme, which funds the employment of wildlife rangers to monitor and protect the reserve. WLT also helps fund the leasing of areas of the CWR.

More about the conservation work of World Land Trust in Caucasus, Armenia »

You can help protect more rare species like Grey Wolves by donating to WLT’s Keepers of the Wild programme.