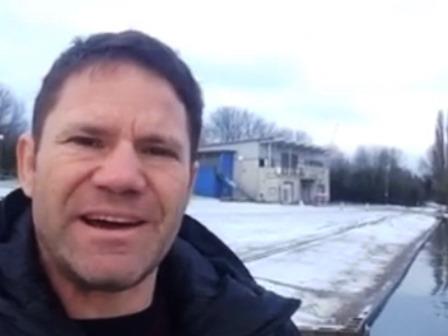 On the last day of January, in freezing temperatures and with snow on the ground, he told viewers: “In a couple of months’ time we’ll be kayaking 125 miles down the Thames finishing outside the Houses of Parliament.”

Steve is kayaking from Devizes to Westminster to raise funds to protect rainforest in Colombia. He said: “It’s something very tangible that we can do to protect a very threatened environment and a place that’s very, very dear to my heart.”

“World Land Trust and its partners are well placed to build on recent conservation milestones in Colombia, by extending corridors between protected areas, putting in place rangers to protect the reserves, and by buying more forest to increase the protected areas,” said John Burton, WLT Chief Executive. “We are delighted that Steve is taking on this challenge to support WLT’s conservation projects in Colombia.”

The area is rich in frogs and other amphibians, and there is a good chance new species will be identified.

Steve made the video message before a training session with fellow paddler George Barnicoat to prepare for the Devizes Westminster kayak race on 4 April 2015.

Considered one of the most gruelling races in the UK endurance calendar, the race involves non-stop kayaking and portage (carrying the boat) around 77 locks on the Kennet and Avon Canal and on the River Thames.

Since launching his fundraising effort in late January, Steve has already raised £2,000 for WLT. He has high hopes of raising many more donations between now and race day.

He ended his message: “Thank you so, so much to everyone who’s already donated some money to the cause. I appreciate it so much. I hope you will follow our progress over the next few months and on the race itself.”