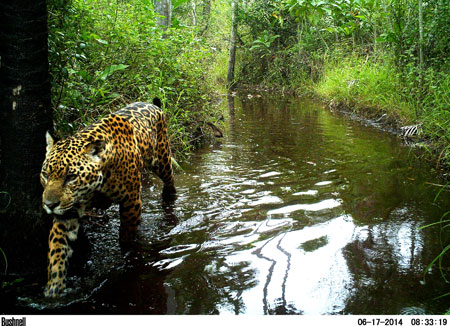 An image of a Jaguar in Paraguay has scooped the overall prize in the World Land Trust (WLT) International Trail Camera Competition, run in conjunction with The Times.

Enterprise Plants has generously sponsored the competition prizes: research grants for the conservation organisations that recorded the winning images.

The image of a Jaguar (Panthera onca) was recorded at Three Giants Biological Station in the Chaco-Pantanal Reserve, Paraguay. Pictured above, the winning image was first published in The Times on 28 February 2015.

Guyra Paraguay, WLT’s conservation partner in Paraguay submitted the image and wins an award of £5,000.

Simon Barnes, writer and WLT Council member, was one of the competition judges.

He explained why this image won the top award: “Spotty cats have an unfair advantage when it comes to making humans viewers go ‘phwoar’. A few years ago David Bebber and I strolled on that very path, now flooded, as we worked on a story about conservation. It’s the way the cat ignores the camera that makes the picture work so well: slouching out of frame with feline contempt for humans and their works.” 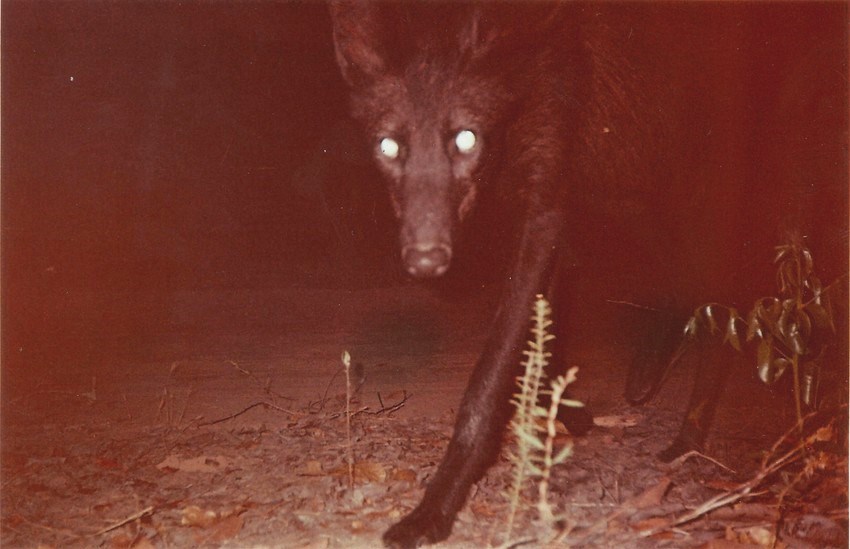 The winner of the endangered species category is an image of the first known black Maned Wolf. © Instituto Biotrópicos.

The winner of the endangered species category is an image of the first known black Maned Wolf (Chrysocyon brachyurus).

Instituto Biotrópicos submitted the image, which was recorded in Veredas do Acari Sustainable Reserve, Minas Gerais, Brazil, with the help of park rangers who were assisting a species inventory of the area. The image wins £2,000 for the institute.

Of this image Simon commented: “The black mask of the Maned Wolf won the endangered species category: a strange species usually described as a fox on stilts. But this individual, as you see, is not in the usual foxy colours but in fashionable black: a strange dark animal lurking in the greater darkness and wondering what the hell his human neighbours have left out on the trail.”

This is the first black Maned Wolf to ever have been described or observed. The Maned Wolf is listed as Near Threatened by IUCN. 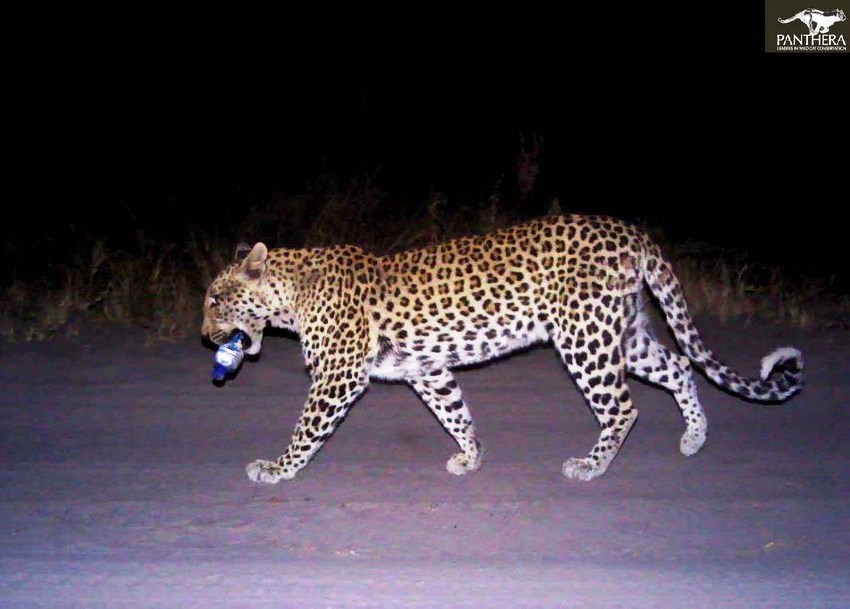 An image of a leopard carrying a bottle wins top prize in the unusual behaviour category. © Botswana Predator Conservation Trust.

Trash is often a problem in areas with wildlife-based tourism industries and an image of a leopard (Panthera pardus) carrying a water bottle won the award for unusual behaviour.

Simon commented: “The leopard, carrying a plastic water-bottle for reasons best known to himself, won the behaviour category: an uncomfortable and vivid reminder that all non-human animals must these days live their lives in the context of their ever-more-numerous neighbours.”

A film of an Asiatic Cheetah at a drinking point in Miandasht Wildlife Refuge in north Khorasan in Iran won the video category award.

According to Simon: “It was the one category that sparked no debate: we were unanimous from the first viewing. It’s a glorious tale in miniature and it begins – but only begins – with a camel.”

The video was recorded by Iranian Cheetah Society and wins £2,000.

Reviewing all the winners, Simon commented: “We have here some breath-taking chance-driven images. They tell us of the many wonderful conservation efforts going on across the world, the sort of thing World Land Trust exists to help. But even more than that, they tell us of the still more wonderful wild animals that we – still – share our planet with: creatures that inspire scientists and conservation organisations and for that matter, millions and millions of human beings all around this crowded and troubled planet.”

The People’s Choice award winner will receive a Bushnell Natureview 119440.

On Tuesday 3 March 2015 the public will be able to vote for their favourite picture from among the winning entries and other images shortlisted. The People’s Choice award will be given to the image that wins the most votes in a public online poll organised by WLT.

The conservation organisation that has entered the image that wins the most votes will win a trail camera kindly donated by Bushnell.

The competition will be launched on WLT website on 2 March 2015 in the afternoon. The closing time and date for voting is midnight on Sunday 8 March 2015 (GMT).