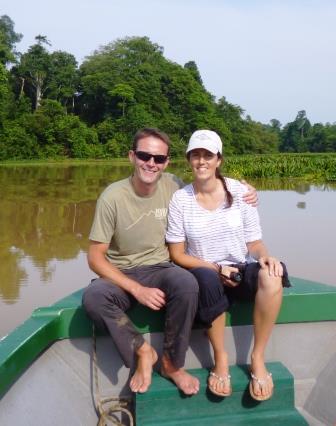 Dominick Spracklen and his wife Jude have raised more than £925 for World Land Trust (WLT) to save threatened rainforest in Malaysian Borneo.

The couple invited their friends and family to donate to WLT to celebrate their wedding on 6 September 2014 at Malham Tarn in the Yorkshire Dales National Park.

Dominick is Associate Professor (Biosphere, Aerosol & Climate) at the School of Earth and Environment, University of Leeds. He has been working as a volunteer scientific adviser for WLT since 2003, and he became a WLT Friend in 2007.

After the wedding, the couple spent a few days of their honeymoon on the Kinabatangan River, where WLT is supporting habitat conservation projects.

While there, Dominick and Jude enjoyed some exceptional wildlife sightings including a group of some 17 Bornean Elephants (Elephas maximus borneensis), which are listed by IUCN as Endangered.

Describing Kinabatangan, Dominick said: “This is a truly amazing area for wildlife. But we also saw the massive impact that oil palm plantations were having on the forest and the critical need to save some of the last remaining areas of rainforest clinging to the banks of the river.”

Dominick and Jude also spent time with some of the very knowledgeable wildlife guides working on the river. “They are clearly passionate about the wildlife, but also worried about the future of their communities who depend on wildlife tourism for their livelihoods,” said Dominick.

“WLT’s support of local partners to protect some of the last remaining areas of unprotected forest is absolutely critical to the survival of the wildlife and the local people who depend on it.”

Rhinoceros Hornbill (Near Threatened), one of eight species of hornbill found in Kinabatangan. © Felicity Oram / Hutan.

They were also lucky enough to see the Endangered Storm Stork (Ciconia stormi) and the Near Threatened Bornean Falconette (Microhierax latifrons).

There are more than 74,000 acres (30,000 hectares) of forest under protection in the Lower Kinabatangan floodplain, but these reserves are fragmented and under threat from the expansion of agriculture, namely oil palm production.

Since 2008, WLT and its project partners in Malaysia, Hutan and LEAP Spiral, have been working to secure strategically vital areas of forest to connect fragmented patches of habitat and create wildlife corridors.

WLT Friends make a regular donation of a minimum of £5 or more a month. Over a 12 month period, this adds up to a minimum of £60 and if WLT can claim Gift Aid on the donation this increases the amount further. This is not a charity membership but you will join with WLT in helping to save more threatened habitat and its wildlife.

Friends’ donations go into the WLT Action Fund for our most urgent project needs. The Action Fund enables us to respond quickly when urgent conservation intervention is needed, so your donation may be used on any one of WLT’s many important projects. Click here for more about how to become a WLT Friend »

You can also support WLT’s conservation project in Borneo, by donating to the Borneo Rainforest Appeal.