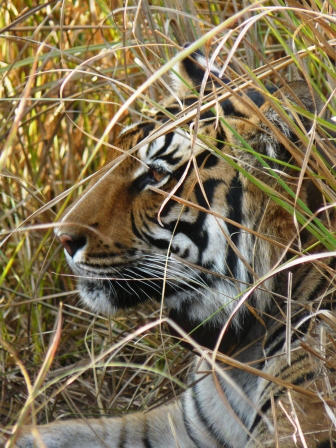 Tiger numbers have all but doubled in Kerala, southern India, where World Land Trust (WLT) helped create a wildlife corridor in 2012 in partnership with Wildlife Trust of India (WTI).

Evidence for the increase has been published in the Indian government report Status of Tigers in India, 2014, released in January 2015.

Supported by WLT, Tirunelli-Kudrakote Corridor in Kerala lies within the Mudumalai-Bandipur-Nagarhole-Wayanad complex of the Western Ghat landscape. This complex now holds the world’s single largest tiger population, estimated at more than 570 tigers, according to the census.

Tiger numbers up across India

WLT is currently working with WTI to create a wildlife corridor in Uttarakhand, Chilkiya-Kota Corridor. In this northern Indian state, the census notes “a remarkable increase in tiger population and occupancy”. In 2014, 340 tigers were recorded in Uttarakhand, compared to 227 in 2010.

To collate the data, an unprecedented effort was invested in camera traps across forests in 18 states known to shelter tigers. This resulted in a total of 1,540 unique tiger photo-captures. Other methods of monitoring involved remotely sensed data, geographical information systems and extensive ground surveys.

The study was commissioned by India’s National Tiger Conservation Authority and carried out by State Forest Department personnel, NGOs and Wildlife Institute of India. The report concludes: “The political will, conservation commitment by wildlife managers and improved protection have paid dividends.”

“The 2014 tiger census is very encouraging. The figures reflect the concerted efforts of multiple stakeholders backed by the Indian government, and suggest that wildlife protection measures are improving,” said David Wright, WLT’s Head of Programmes, who recently returned from a field trip to Chilkiya-Kota Corridor.

He added: “However the pressure on India’s natural habitat is intense, and for this positive trend to continue, action to conserve tigers in the wild requires a strategic focus as well as substantial funding. World Land Trust remains committed to working with Wildlife Trust of India to create more corridors for tigers and other wildlife across India.”

Read the full report: Status of Tigers in India, 2014