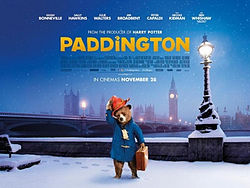 The release of a new film about Paddington Bear has put the spotlight on Spectacled Bears. With projects in three South American countries that promise to ‘look after this bear’, World Land Trust (WLT) is determined to save this iconic species.

The world’s most famous Spectacled Bear, Paddington, arrived in London on 13 October 1958 when Michael Bond’s first book, A Bear called Paddington, was published.

The Spectacled Bear is the only species of bear native to South America and Paddington Bear famously came from ‘darkest Peru’. As well as in Peru, Spectacled Bears are found in Venezuela, Colombia, Ecuador, Argentina and Bolivia, mostly on the humid eastern slopes of the Andes mountains.

As bears go they are relatively small (weighing up to 440lbs, or 200kg) and each has a distinct marking around the eyes, face and muzzle, earning it the name ‘spectacled’. Each marking is unique, just as a thumb print is in a human.

The release of the film about Paddington Bear provides an excellent opportunity to tell the world about the plight of Spectacled Bears in the wild. WLT Council member and journalist Simon Barnes has written about them in the Daily Mail newspaper and, thanks to Simon, Spectacled Bears had a mention on BBC Radio 4’s Today Programme in early December.

Spectacled Bears face a myriad of threats in the wild, particularly habitat loss and habitat fragmentation. They are listed as Vulnerable to extinction by IUCN and estimates suggest that there could be fewer than 1,400 surviving in the wild.

The Spectacled Bear is hunted by humans for body parts and because they cause crop damage and occasionally prey on cattle. Part of the food chain, they are also preyed upon by Jaguar and Puma.

Spectacled Bears aren’t vegetarian, but berries, cactus, bamboo and fruit make up a large part of their diet – so they probably wouldn’t turn down a marmalade sandwich. About 5 per cent of their diet consists of meat in the form of insects, birds and small mammals.

Fortunately, Paddington’s wild relatives are mostly shy and solitary, hiding in nests that they build high in tall trees. So as long as they have trees to climb and shelter in, they have a chance of survival.

World Land Trust works with partners in Ecuador, Peru and Colombia to safeguard forests where Spectacled Bears are known to occur. In protected areas they are seen by rangers and forest workers who observe them when the bears feed during the day. Because there is usually plentiful food and relatively warm temperatures where they occur, Spectacled Bears do not hibernate.

If Paddington Bear were alive today he would have just had his 57th birthday, making him very old by Spectacled Bear standards. They live up to 20 years – but in reality their future is not bright.

As Simon wrote in the Daily Mail about the Spectacled Bear: “It has always lived in obscurity, and it’s possible it will die out in the same way. Unless we do something about it (and one way to do that is to support the World Land Trust). Here we have a fascinating beast whose life is being compromised by the relentless pressure exerted by humans. Please look after this bear. Please look after this planet. Thank you.”