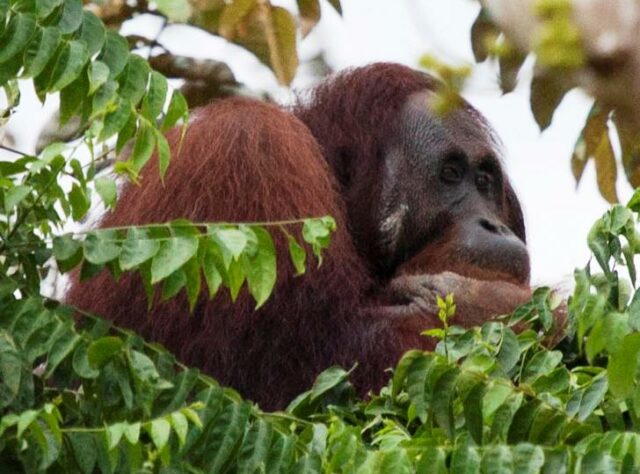 The British and Irish Association of Zoos and Aquariums (BIAZA) has been urging shoppers to read the label before buying a Christmas pudding this year in a bid to save species, like the Bornean Orang-utan, from extinction.

The focus of the campaign is the widespread use of palm oil in food and the destructive, knock on effect of palm plantations in areas of high biodiversity.

In Malaysian Borneo, for example, the rapid spread of oil palm cultivation in the rainforest threatens to destroy the remaining, fragmented habitat of the Bornean Orang-utan, which is listed as Endangered by IUCN.

World Land Trust (WLT) is also concerned to highlight the plight of the rainforest of Malaysian Borneo.

Since 2008, WLT has been supporting land purchase and conservation to protect rainforest in Sabah.

In 2013 WLT launched the very successful Borneo Rainforest Appeal in partnership with Hutan, the Trust’s conservation partner in Malaysia. By May 2014 the Trust’s supporters had raised £1million to create and protect the Keruak Corridor along the north bank of the Kinabatangan river.

BIAZA launched the campaign to mark a recent change in UK food regulations: since 13 December 2014, food products have been required by law to state the source of any oil or fat ingredient including palm oil.

Nicky Needham, Programmes and Policy Coordinator at BIAZA, said: “It is great to see the UK Food Information Regulations 2014 come into force as this will help the public make more informed choices on what they buy. This is a really positive step in the right direction, but we still need clearer information on the options of using sustainably-sourced palm oil.”

Orang-utan numbers are declining rapidly with fewer than 54,000 Bornean Orang-utan and fewer than 7,300 Sumatran Oang-utans left in the wild. The UN has declared the plight of these animals a conservation emergency and understanding the debate is a first step to addressing it.

As a statement from BIAZA points out: “Shoppers now need to decide whether to boycott food products with palm oil completely or choose products only containing certified sustainable palm oil. By boycotting completely we risk shifting oil consumption to less productive oils such as soya which would use seven times more land space per tonne; however with sustainable palm oil there are doubts over robustness and full traceability. Credible certification is essential and it would be a significant achievement if the UK can ensure that only 100% sustainable palm oil is imported by 2015.”

BIAZA has developed the campaign in association with the Jane Goodall Institute, the Orangutan Foundation and the 108 BIAZA members.

Since 2006 WLT has been working in partnership with BIAZA and its members to raise funds for conservation projects. The projects include the creation of the BIAZA reserve in the Atlantic forest of Brazil, and supporting wild rangers (BIAZA Keepers of the Wild).

In 2014, BIAZA members raised more than £23,000 for BIAZA Buy an Acre to purchase and protect threatened habitat in Sierra Gorda, Mexico.

World Land Trust’s Wild Spaces programme gives zoos, aquariums and their associations the opportunity to support conservation in the wild. If you would like to know more about how your zoo can become involved with Wild Spaces please contact Kelly Jacobs, WLT’s Wild Spaces Project Manager.