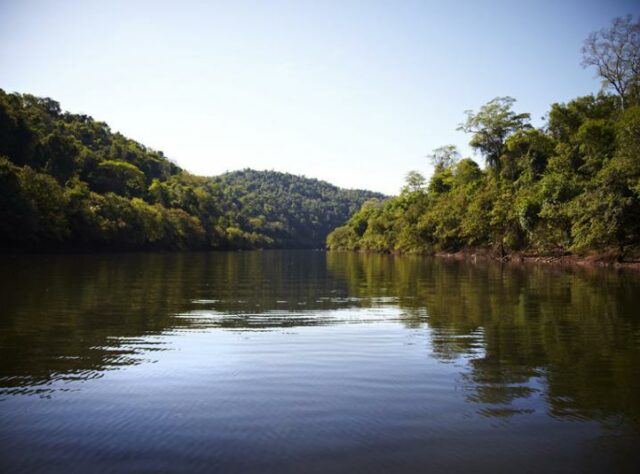 Since 2009 Eurojersey has made a donation to WLT for every metre of Sensitive® Fabrics used in the lingerie, swimwear and sports sector; the total donated so far is €230,977.

As agreed with Eurojersey, WLT has used the funds to save an area of tropical broad-leaf forest within the Yabotí Biosphere Reserve in Misiones in northern Argentina. Of the total area saved in Misiones, Eurojersey’s donation saved 34,567,271 square metres or 8,642 acres.

“Without the support of Eurojersey and all its customers, this ground-breaking conservation project would not have been possible,” said John Burton, WLT Chief Executive, while on a visit to the fabric manufacturer’s headquarters in Italy.

The land now protected in Misiones, seen as an absolute priority to save, is part of an area now known as the Emerald Green Corridor; it connects the Moconá Provincial Park with the Esmeralda Provincial Park and the Turvo State Park in Brazil.

The land purchase was made in partnership with Fundación Naturaleza para el Futuro (FuNaFu), one of WLT’s conservation partners in Argentina. In 2013, Andrea Gazza (Eurojersey Chief Finance Officer) and his family visited the conservation project in Misiones as a guest of FuNaFu.

While in Milan, John thanked Eurojersey for its donations and support. “We are really grateful for Eurojersey’s commitment over the past five years and we very much hope that the company will consider supporting a new land purchase and protection project in 2015,” he said.

Eurojersey’s Caronno Pertusella factory in Milan is one of the most environmentally friendly manufacturers of fabrics in Europe and it was the company’s idea to use a percentage of their turnover to conserve tropical forest.

The company’s commitment to the environment starts in the factory where a range of energy reduction measures go far beyond statutory regulations. The roof of the car park is fitted with solar panels and a sophisticated air filtration system in the production halls prevents the release of any chemicals into the atmosphere.