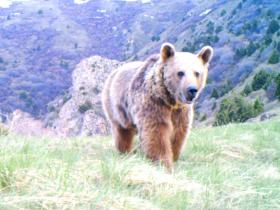 With the deadline for World Land Trust’s (WLT) International Trail Camera Competition approaching, Simon Barnes, one of the competition judges, and Chris Jenkin of Enterprise Plants consider the importance of remote images

“How many automatic cameras will it take to create an authentic photographic masterpiece?” asks Simon Barnes, writer, journalist and a WLT Council member. Surprisingly, the answer is not as many as you might think. In fact, as Simon puts it: “The random masterpiece is the everyday stuff of the trail camera.”

Chris Jenkins, Managing Director of Enterprise Plants, is delighted to that his company is sponsoring the project.

As Simon explains in a recent video interview, every day and every night across the wild world, trail cameras record the comings and goings of wild things and, every day, the images are used in countless numbers of scientific projects.

Recognising the importance of remote images for science and conservation, World Land Trust has provided funding to many of its conservation partners for trail cameras. And, recognising the tendency of these cameras to turn up major scientific discoveries and occasional masterpieces, in the Trust’s 25th Anniversary year, the World Land Trust International Trail Camera Competition was launched in association with The Times newspaper.

In the competition, images from simple machines are judged for their beauty and drama by those who understand about photography and wildlife.

Each of the winning entries of the four categories will win a prize of £2,000 towards their wildlife conservation project. The overall winner will collect an additional £3,000, making the top prize £5,000.

Link to online entry form and terms and conditions »