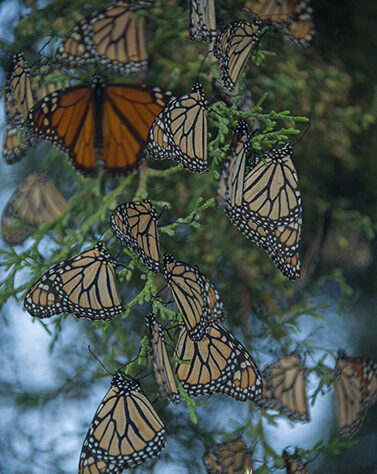 Although three weeks late, Monarch Butterflies have started to appear all over Sierra Gorda, stopping off on their long migration to the fir forests further south.

He told us: “As you  know, Monarch Butterflies are extremely endangered  thanks to logging, government ‘protected areas’ that aren’t protected, and industrialised agriculture in the US and Canada.”

Roberto found the big group of the butterflies in the highlands of Sierra Gorda. There were so many of them that the branches of the cedar were bowing under the weight.

He noticed that they had returned to the same place that he remembered them visiting when he was a child.

“When I was young, the oak branches bent under the weight of the butterflies. Now there is a cedar in the same spot, and the same oaks with some butterflies. Unfortunately they are nothing compared with their former numbers, but it’s amazing how they ‘remember’ their wintering grounds in central Mexico, and the good spots to have a nap and a rest during the long journey.”

Traditionally Monarch Butterflies arrive in Mexico on the Day of the Dead, which is celebrated on the first two days of November, and according to Mexican folklore they are said to represent the souls of the dead.

WLT has funded land purchase and conservation in Sierra Gorda since 2007. You can help save more habitat for Monarch Butterflies  by making a donation to WLT’s Buy an Acre appeal.