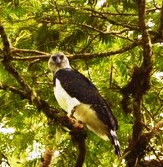 An adult and a juvenile Harpy Eagle (Harpia harpyja) have been observed at altitudes above 1,000 metres in Narupa Reserve in Ecuador.

A huge, iconic eagle of the rainforests of Central and South America, the Harpy Eagle is more usually found in lowland areas. It is registered as Near Threatened by IUCN and sightings are rare. It is thought to be locally or regionally extinct in large parts of its former range, notably most of central and north Central America.

The eagles in Narupa were spotted in the early afternoon of 8 November 2014 by wildlife ranger Mario Pilataxi and Luis Salagaje who works at the Yanayacu Research Station. Narupa Reserve is supported by World Land Trust (WLT) and managed by Fundación Jocotoco, one of WLT’s four conservation partners in Ecuador.

Juan Carlos Crespo, Jocotoco’s Reserves Director, described the significance of the sighting: “The Harpy Eagles in Narupa were observed at an altitude of between 1,300 and 1,400 metres above sea level. In eastern Ecuador the species is not usually found above 400 metres and though there have been sightings at higher elevations there are no records of Harpy Eagles in the area above 1,000 metres.”

Nigel Simpson, WLT Trustee and co-founder of Jocotoco, agrees that the sighting is very unusual: “The Harpy Eagles are quite remarkable – and especially at the altitude of Narupa – above 1,000m,” he said.

The Harpy Eagle is found in uninterrupted expanses of lowland tropical forest typically below 900 metres but locally up to 2,000 metres, according to IUCN.

It is the largest and most powerful raptor in the Americas although its wingspan is relatively short. This adaptation, shared by other forest dwelling raptors, increases ease of movement in wooded areas. The species is also known for its double crest which looks spectacular when fully displayed.

The Harpy Eagle’s survival chances are threatened by loss of habitat due to forest destruction. Hunting is also a serious threat, both for trophies and because this large eagle may be perceived as a danger to livestock.

Efforts to conserve the species have focused on creating a network of protected reserves and education programmes designed to change local attitudes to hunting.

You can support conservation efforts to save the Harpy Eagle in Ecuador by making a donation to WLT’s Keepers of the Wild appeal.

World Land Trust has been working to save habitat for the Harpy Eagle for more than 25 years – and not just in Ecuador. The species is found in Rio Bravo Conservation Management Area in Belize, where WLT has been supporting conservation since 1989. The Harpy Eagle is also present in the Atlantic forest of Brazil where WLT supports Reserva Ecológica de Guapi Assu (REGUA).