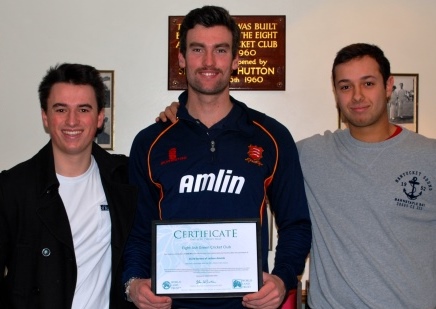 The club officially claimed the title ‘first Carbon Balanced cricket club’ at an event to announce their successful emissions reductions at the ground at Fordham Heath on 22 November 2014.

During the event Reece Topley presented a World Land Trust Carbon Balanced Certificate to the club. Reece, who plays for Essex, is son of former England and Essex legend Don Topley, who has historical ties with the club.

During the presentation Reece announced that that club had Carbon Balanced 16 tonnes of carbon dioxide during the 2013-2014 cricket season.

He said: “I would like to congratulate Eight Ash Green on becoming the first Carbon Balanced cricket club, especially as they have done so by supporting my one of favourite charities, World Land Trust. May many follow in their footsteps and I would like to wish the club all the best for next season too!”

“Eight Ash Green Cricket Club is delighted to be part of this long term carbon project and will continue to strive to reduce emissions,” said Luke Keeble who led the initiative.

A group of enthusiastic young members of the club drove the project. Along with Luke were Steve Nunn, Matt Parker and Ollie Stovell, winner of a £200 award from the Jack Petchey Foundation. Ollie, who received the award for youth coaching and for creating a carbon policy and action plan for the club, has donated the £200 to support ongoing energy reduction measures.

The team has had tremendous support from the local community. The project has been sponsored by Neutral Territory and its Director Richard Parker, who is also President and long-serving member of the cricket club. The club has also benefited from the advisory service of the Low Carbon Champions Programme, a community project designed to help small and medium sized enterprises to reduce their carbon footprint.

All WLT’s Carbon Balanced sites are closely monitored to verify the emissions reductions by integrating them into existing nature reserves managed by their overseas conservation partners.

The announcement was made on Saturday 22 November in the George Porter Pavilion of Eight Ash Green Cricket Club, Colchester CO3 9TA