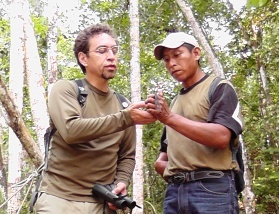 After three years as a World Land Trust (WLT) Keeper of the Wild, ranger Ricardo Coc is keen to continue his work to protect biodiversity.

He works in Laguna Grande Sarstún Reserve in the east of the country, where a unique system of lagoons, mangroves, and tropical forest habitats is home to thousands of species.

Since becoming a ranger in 2011 Ricardo has repeatedly walked the same trails in the reserve, and yet he continues to be amazed at the wonders of place that it is his job to protect.

Every day, the forest continues to surprise him, he says. Beautiful reptiles, hundreds of birds, monkeys, flowers and even a footprint of what is believed to be a Jaguar are some examples of the spectacular biodiversity that he finds along the way.

Ricardo believes that his experiences as a ranger have changed him: “The help from WLT has allowed me to grow as a ranger, protecting thousands of plants and animals. It has also helped me grow as a person. Thank you very much for this opportunity. I will be more than grateful to continue this work over the years: protecting nature has become my life.”

One of the main aspects of FUNDAECO’s conservation work has been to engage the communities and the government institutions in helping to conserve Rio Sarstún.

In this respect Ricardo has become an important player in the local community and has been able to raise awareness locally of the importance of the area.  After more than three years as a ranger he is more than ever determined to communicate to people living locally the importance of preserving biodiversity.

He explains: “It’s important that people that live in these forests become able to look with our eyes so they can see the uniqueness of nature; we need to get more people involved.”

Thanks to support from WLT, FUNDAECO’s land purchase of Laguna Grande-Sarstún Reserve was completed in 2013, but WLT continues to support the ongoing protection of the reserve through the Keepers of the Wild programme.