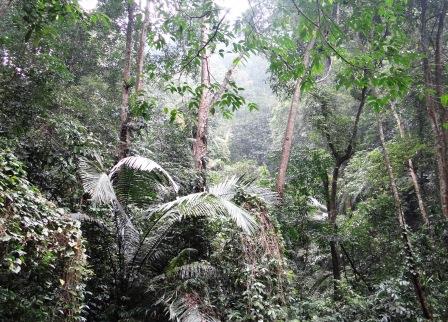 Tran Dang Hieu is one of two rangers employed by Viet Nature with support from the Keepers of the Wild programme of World Land Trust (WLT). He works in Khe Nuoc Trong forest of north central Vietnam.

“My work is very important because biodiversity conservation and nature conservation are contributing to improved environmental, ecological balance, and reducing the risk of extinction of species,” he explains.

Dang Hieu describes a working day that can be long and arduous: he starts work at 7.30am and travels on foot. “Rugged mountainous terrain makes it difficult out on patrol. I can walk up to 20 km in the forest, but on average I walk about five to 10 km daily in the forest,” he says.

Most of the patrols are within a day, but when rangers are on multi-day patrol or on camera trap surveys they camp in the forest and sleep in hammocks.

Viet Nature aims to equip rangers with binoculars, a compass, a camera, protective clothing and a sleeping bag, but sometimes equipment such as GPS and cameras have to be shared.

While on patrol in Khe Nuoc Trong, Dang Hieu is always on the lookout for Edwards Pheasant (Lophura edwardsi), a bird species not seen in the wild since 2000 and now on the brink of extinction in the wild.

He said: “I have always wanted to see the species Lophura edwardsi because this pheasant is Critically Endangered. The remaining wild population is likely to be extremely small and severely fragmented, and it is endemic to Central Vietnam.”

He is also on the watch for poachers: “I’ve met a few hunters in the forest, they often used snares to trap the small and medium-sized mammals.”

In Khe Nuoc Trong camera-traps are used to monitor wildlife: “We usually put the camera traps around the small streams where the animals often come to drink water.”

At the moment Khe Nuoc Trong is not open to visitors, although Dang Hieu would like to see this situation change: “I’d love to be a tour guide for visitors. I think visitors would like the reserve because it has beautiful scenery, cool climate and friendly people.”

He also believes that it’s important to work with local people to find out their opinions: “People here depend on forests and we need to survey the views of local people to understand their attitudes to the forest.”

Before Dang Hieu became a Viet Nature ranger he was a district ranger. He explains his motivation to work in conservation: “I love nature and want to preserve it. I think my job will contribute to reducing environmental pollution, disaster reduction and reduced degradation of species.”

Dang Hieu has been working in Khe Nuoc Trong since early in 2014. He lives in Dong Hoi City, Vietnam, which is about 50km from the site, and commutes to and from work by motorbike, a journey of about an hour. He stays at Khe Nuoc Trong at least five days a week.

WLT raises funds for the Keepers of the Wild programme to support more rangers to protect some of the most threatened habitats and wildlife on Earth.