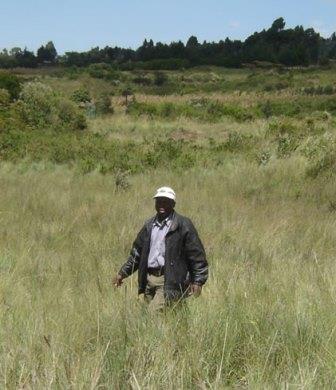 Building on a successful partnership between World Land Trust (WLT) and Nature Kenya, WLT is now supporting a ranger at Kinangop – Andrew Mwangi Waweru – through the Keepers of the Wild programme.

Andrew has been involved with the Friends of Kinangop Plateau (FOKP) community group for over 17 years, and now works as a ranger at Leleshwa Nature Reserve within the Kinangop Grasslands Plateau.

Nature Kenya manages the reserve in partnership with FOKP, specifically to protect tussock grassland habitat for specialist bird species such as the Endangered Sharpe’s Longclaw. (WLT donated some of the funding to help set up the reserve.)

Andrew, 45, has come to recognise the importance of the role he plays as a ranger for Leleshwa Nature Reserve, and the difference it has made both to himself and his family.

“The work is very important and noble, since it is conserving and preserving nature, ensuring the gene pool of flora and fauna is maintained. Also it encourages me to learn more about plants and animals. I have gained in-depth harmony with nature, and the small family I have has been assured of its daily bread.”

Leleshwa Nature Reserve is just one of four reserves purchased and protected by Nature Kenya and FOKP and Andrew works in all four of them. His main day-to-day responsibility focuses on site protection: monitoring illegal activity and dealing with immediate threats to the grasslands habitats, which ranges from unauthorised grazing or harvesting of grass to outright vandalism at the reserve.

The life of a warden

Living on site means that Andrew is on-call 24 hours a day, and after working his normal eight-hour day, Andrew also has to provide the necessary security against illegal activity at night.

“Since there isn’t a night guard at the resource centre, I have to keep watch until 10.30pm and then go to sleep. Sometimes I am called to duty even after retiring to bed. This has forced me to be alert all the time.”

And although FOKP volunteers help with the daily monitoring tasks, Andrew mentions that ‘extra hands’ would be beneficial for increasing security in Kinangop, especially now there are four reserves to be protected.

Andrew’s daytime activities include: managing the Eco Resource Centre and hosting visitors and school groups to the reserve; monitoring activity on the reserve, as well as ongoing land use on farms surrounding the reserves which may have an impact on the wider ecosystem.

Daily monitoring of biodiversity is one of the highlights of Andrew’s role as a ranger: “I once witnessed a Rufus Sparrow fighting a snake, and due to the noise they were making, they had also attracted a Common Fiscal and a Superb Starling.”

Resources available to Andrew can be limited, and simple equipment such as binoculars, field guides, two-way radios, or a good quality compass – items that would be thought essential for carrying out a ranger’s daily responsibilities – are often hard to come by, not to mention specialist biodiversity monitoring equipment or even computers.

Rangers and the local community

Outreach and environmental education is another important activity for Andrew’s role as a ranger, and his involvement with community groups is one of the aspects of his job that Andrew enjoys the most.

The work of a ranger is never easy and Andrew spends time addressing the concerns of farmers whose land borders the reserve areas. Human-wildlife conflict is a particular issue, crop damage from wild birds, for example, or loss of livestock to large predators such as Hyenas. Dealing with these concerns is of great importance to the work of FOKP, which functions as a site-support group, initiated by local people themselves.

“Since becoming a ranger, I have gained experience in conflict resolution and have gotten the local community to understand the issues of conservation.”

There is also widespread disquiet over loss of community grazing grounds due to private purchase and Andrew recognises that despite the ongoing effort made by Nature Kenya and FOKP, support from the local government is key to the long-term protection of the grasslands.

“The government is trying to support conservation work – it’s very positive, but there’s more to be done. They have started public participation in management of resources, for example community forest associations. However, they should be buying more nature reserves for endangered species of animals, especially birds, instead of allowing it to become fragmented into pieces.” 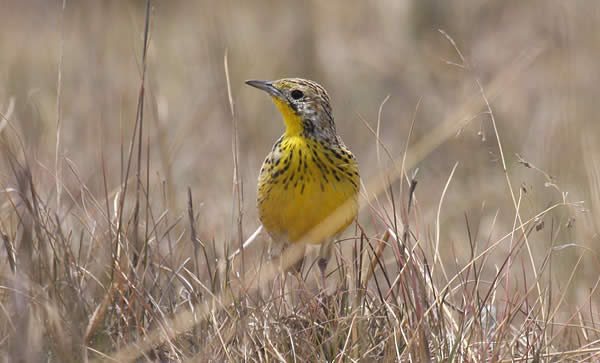 Kinangop is home to rare species such as Sharpe’s Longclaw. © Charles Moores.

Located in Kenya’s Central Province, the Kinangop Plateau comprises of 190,200 acres (77,000 hectares) of largely unprotected grassland, which is vanishing at an alarming rate along with the wildlife it shelters.

Originally, the Kinangop plateau was almost treeless, covered with tussock grassland and bogs, but today the grasslands are seriously threatened by conversion to agriculture and replacement of the native tussock grassland for species that are more palatable for livestock.