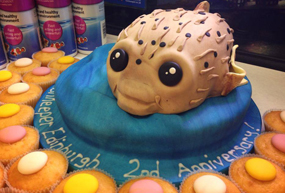 The Edinburgh Fishkeeper stores celebrated their second anniversary in 2014. At their birthday event the stars of the show were the cakes! Along with their donation from the raffle, the store sent us this great picture of one of their cakes in the shape of a Puffer fish (right).

Meanwhile, Maidenhead Aquatics is celebrating its 30th anniversary. To mark the occasion and 30 years of fishkeeping excellence, a commemorative Bag for Life has been designed. Made from natural, renewable and sturdy jute fibres, £1 from the sale of each bag is being donated to the World Land Trust’s Action Fund.

The bags are available in all Maidenhead Aquatics stores and they hope to be able to donate £15,000 from the sales to be used to buy and forever preserve an area of Colombian rainforest.

Maidenhead Aquatics was established in 1984 and is now the UK’s largest leading specialist aquatic retailer with 130 stores throughout the UK. A group of Maidenhead Aquatics stores have been supporting WLT for several years. They raise funds through WLT collection boxes in stores and make a donation to WLT for every fish box sold (sustainably sourced aquarium starter kits).

Maidenhead Aquatics is a highly reputable aquatic company that strives for environmental accountability and would never knowingly sell fish that has not been ethically sourced, or where fish-husbandry was questionable. They actively promote responsible fish-keeping among their customers.