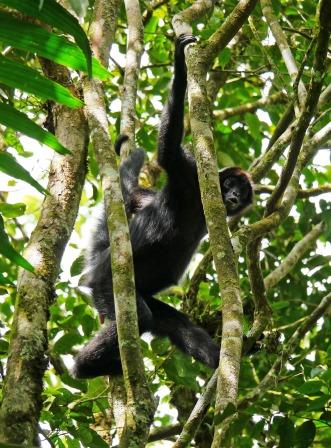 World Land Trust (WLT) has contributed to a land purchase that helps save an important fragment of highly threatened Chocó forest in northwestern Ecuador.

WLT is one of a group of international donors that has co-funded the purchase of six properties to extend Río Canandé Reserve, thanks to a joint effort spearheaded by Fundación Jocotoco, one of WLT’s four partners in Ecuador. The other funders were American Bird Conservancy (ABC), March Conservation Fund and Rainforest Trust.

Together, the six properties add 1,187 acres (480 hectares) to the Río Canandé Reserve, which now covers more than 6,100 acres of protected forest.

The reserve protects one of the last remnants of the Chocó region in Ecuador which ranks as the fourth hotspot for biodiversity in the world. The coastal tropical rainforest of the Chocó extends from southern Colombia to northern Ecuador. It holds innumerable species of plants and animals of which a high percentage is endemic, while many others remain undiscovered.

In Ecuador, less than the 10 per cent of the original Chocó forest cover remains intact. Due to the high level of endemism and the increasing threats facing this region, such as deforestation and the rapid spreading of oil palm plantations, Fundación Jocotoco has prioritised expanding the Río Canandé Reserve.

The zone where the recent purchased properties are located contains healthy ecosystems and extraordinary biodiversity.

During 2014, wildlife rangers of Río Canandé have repeatedly observed flocks of Great Green Macaws and troops of Spider Monkeys around the newly acquired properties. This reflects the importance of these areas for the conservation of these charismatic species.

“This new addition is a remarkable conservation achievement in Ecuador. The expansion represents not only the protection of the habitat of the Great Green Macaws, but also the possibility to connect the Río Canandé reserve with other protected areas that will permit the movement for big mammals, birds, primates and other animals freely and away from hunters or other threats,” said Rocio Merino, Executive Director of Fundación Jocotoco.

“World Land Trust has been working for several years in both Ecuador and Colombia to save and link up the remaining fragments of Chocó forest. This is another important milestone and I am delighted that the purchase has been completed,” said David Wright, WLT’s Head of Conservation Programmes.

The Chocó forest and natural habitats in the region have been dramatically reduced in their extent due first to logging by the settlers and timber companies and later by a boom in the cultivation of oil palm and biofuel crops, agriculture and livestock production.

The reserve is situated within a zone where timber extraction is active and to the west and south of the reserve are large areas of oil palm plantations. In recent years these activities and the expansion of settlements have severely reduced the primary forests of the Ecuadorian Chocó.

Fortunately, thanks to the support of World Land Trust’s Keepers of the Wild programme, Jocotoco will be able to hire a new wildlife ranger, whose presence will help deter these activities.

Research carried out by experts of Fundación Jocotoco has so far registered 363 bird species within the reserve. Canandé and the neighbouring forest areas represent a real refuge for the threatened birds and other fauna and flora.

There are 61 species of amphibians and reptiles and Rio Canandé is part of the Alliance for Zero Extinction site for the Mache Glass Frog (Cochranella mache), because it is the only place left where this species can be found.

The tree diversity in the zone is very high and includes one of the rarest endemic species in Ecuador, Ecuadodendrum acosta-solisianum, which is only known from two locations in the country.

World Land Trust continues to support Fundación Jocotoco with funding for rangers through the Keepers of the Wild programme.