It was love at first sight SEARCH NEWS 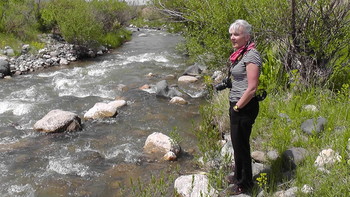 Nicola Davies is an author and an Ambassador for World Land Trust (WLT). Earlier in the year she joined a WLT field trip to Armenia to see close up the conservation that WLT has been supporting in the South Caucasus since 2010. This is her story.

As soon as I saw the red rocks of the mountains of Caucasus Wildlife Refuge (CWR), I was falling. The craggy heights and the wooded ravines breathed an essence of wildness that spoke straight to my heart. Here was a landscape pared to the simplest beauty by -32°C degree winters and 40°C summers.

Armenia’s magic works on the small scale too. Within minutes of arriving at the eco centre constructed by the Foundation for the Preservation of Wildlife and Cultural Assets (FPWC), which also owns and manages the Caucasus Wildlife Refuge, I’d found 15 or more different kinds of plants within a square metre.

As I sat puzzling them out with my Caucasian flora field guide I realized that the half the plants I was looking at were endemics, species found nowhere else on earth. (Two floristic regions, the Asian and the European, meet in the Caucasus giving the region 6,500 different species of plant and a high proportion of endemics.)

Dictamnus albus subspecies caucasicus is found in the Caucasus, southern Russia, Turkey and northwest Iran. A hardy little plant, it will survive in temperatures as low as -18°C. © Nicola Davies.

That first day, the magic went on and on: the nosferatu shapes of Lammergeiers floating over the cliffs; eagles and warblers; orioles and rock nuthatches. As the sinking sun slanted across the mountain slopes, it lit up low vegetation that had been invisible in the starker light of midday. The hardy little plants glowed in a blue green fuzz and released scents of camphor, lavender and thyme. I knew I had lost my heart to Armenia.

I’d come to Armenia as part of my role as World Land Trust (WLT) Ambassador, but also to research the location for my next children’s book, about the rare Caucasian Leopard. I knew of course I wouldn’t see a leopard – we only know they are there from scats, paw prints and camera-trap shots. But I did get to see one of the leopard’s favourite meals. On our first morning at the eco centre, Manuk Manukyan, lynchpin of FPWC, and an extraordinary naturalist, looked through his binoculars and said ‘Bezoar!’

There, high, high, high on a rocky stage 1,500 metres above us was a male Bezoar Goat, his horns like a pair of warlord’s sabres.

On horseback, we followed the big bezoar, our horses picking their way up steep, stony paths, through the embroidered detail of the plants and rocks. As we ascended, we found encouraging evidence of the presence of this large mammal, which is essential for the leopard’s survival: piles of bezoar droppings scattered between the rocks. The view was ravishing, layers of mountains, a haze of plants all from a Lammergeier’s perspective.

These transcendent mountain spaces, where Bezoars and bears, lynx, wolves and leopards still roam, are threatened by over grazing and poaching, while wealthy hunters plunder the precious rarity of Armenia’s big mammals for sport.  To secure the future of the mountains and their leopards, hunting must end and the current heavy burden of human use must be relieved.  It’s a huge task, but FPWC, supported by WLT is stepping up to shoulder this burden.

As with all WLT projects, working closely with people living in the landscapes under threat is vitally important. The mayor of Ustradzor, the village close to the CWR, has been so inspired by FPWC and WLT that his community has pledged to make itself an ‘eco paradise’.

FPWC is seeding the future of conservation too, by running eco clubs to educate children about environmental issues and training them to be the wildlife film-makers of the future. Manuk and FPWC’s director Ruben Khatchatryan have plans to set up more reserves: the wildlife refuge is just the start.

One evening, in the clear mountain scented air the strength of FPWC’s bonds with local people and with colleagues in WLT and IUCN National Committee of the Netherlands (IUCN Netherlands) were beautifully expressed. Ruben played an Armenian tune on bagpipes; the mayor of Urtsadzor raised toasts to ‘friendship’, and ‘Armenian nature’; Bill Oddie, another WLT Ambassador, did a jazz drum solo; and the IUCN Netherlands contingent sang the Dutch version of happy birthday to you to one of the CWR rangers.

This is what real, lasting conservation looks like, this is how it is forged, not in committee rooms, or on computer screens, not in the wording of treaties and laws, but in the relationships made between individuals who grow to know and respect each other. I left Armenia carrying its magic in my heart and a renewed belief in the power of human friendships to change the world.

WLT has been working in partnership with FPWC since 2010 and has supported land purchase and Caucasian Leopard conservation in Armenia and the employment of rangers in the Caucasus Wildlife Refuge.