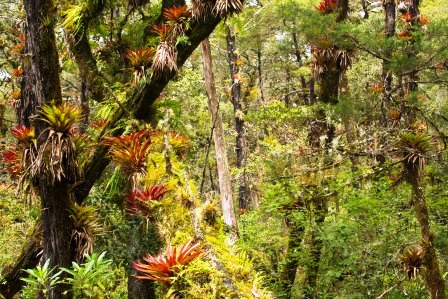 One of the most remarkable tracts of cloud forest in Sierra Gorda has been saved thanks to funding from the Buy an Acre fund of World Land Trust (WLT).

Donate to Buy an Acre in Mexico »

The property covers 103 acres (42 hectares) and lies on the southern border of the Cerro Prieto-Cerro la Luz, a reserve which is owned and managed by WLT’s conservation partner in Mexico, Grupo Ecológico Sierra Gorda (GESG).

Roberto Pedraza, GESG’s Technical Officer, describes the property as exceptional: “It’s very special because the limestone is completely covered with moss and bromeliads which have overwhelmed the old-growth cedars, oaks and pines.”

For small creatures such as tree frogs, the water captured in the spaces between the pointed leaves of the bromeliads provides an important source of moisture, enough in some cases to raise tadpoles.

Referring to these water stores as ‘apartments’, Roberto said: “This property has the most bromeliads I have ever seen. It is quite an amazing place, a salamander and tree frog heaven, for sure, because there are so many apartments, so many bromeliads.”

The extension to the reserve protects a wide range of species including big cats: “The property has several endangered species, and Pumas and Jaguars roam there,” said Roberto who is delighted to be taking custody of such an exceptional piece of forest.

Crotalus triseriatus is a viviparous species of snake, which means it gives birth to live young. © Roberto Pedraza.

On a recent visit to the property Roberto had a potentially dangerous encounter. Looking for a better angle to take a photograph of bromeliads, he almost put his hand on a small snake resting on the bark of a cedar. Only when the snake slithered away did he notice a small rattle at the end of its tail.

“I’m quite a fool, working so close to it – my face just 15 centimetres away – and not recognising a rattle snake,” he said, “but I have never seen before or even read about a climbing one. Luckily it was a mellow and gentle creature! This is quite a special forest, where poisonous snakes are patient with humans and their foolishness.”

Cerro Prieto-Cerro la Luz is the largest reserve that GESG manages with the support of World Land Trust. This extension to the reserve is particularly advantageous because there had previously been plans to build a road across the property.

Roberto explains: “With this new purchase we can completely block that road and without that road the loggers can’t take the timber out from our area.”

Prior to the purchase timber was being extracted and loggers were making roof shingles out of old growth cedars. That activity has now stopped thanks to the presence of GESG rangers.

WLT works with partner organisations across the world to help fund land purchase and create nature reserves to protect threatened habitats and wildlife.

In Mexico, WLT has been working with GESG since 2007 and helped fund the creation of Cerro Prieto-Cerro la Luz in May 2012. Since then WLT has supported other land purchases to enlarge the reserve.

You can help save more acres of forest in Sierra Gorda by making a donation to Buy an Acre.

Donate to Buy an Acre in Mexico »

WLT also supports GESG with Keepers of the Wild funding towards the employment of rangers to protect the reserves.