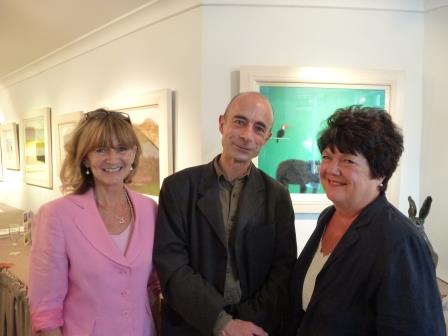 The sale of a work by Andrew Squire has raised £2,100 for World Land Trust (WLT) at an auction organised by Stafford Gallery.

The auction of the painting Spectacled Bear took place during the private view of an exhibition of Andrew’s recent work curated by Stafford Gallery in association with Wimbledon Fine Art on 21 September 2014.

Director of Wimbledon Fine Art, Andrew Stoppani, introduced Master of Ceremonies, TV and Radio personality David Hamilton who thanked the artist for donating the painting and confirmed that the galleries and framer had waived their fees so that World Land Trust would benefit from all monies raised.

Before the painting went under the hammer, Wimbledon resident Ana Contreras spoke about the mission of World Land Trust. Having worked with the Trust’s Colombian conservation partner, Fundación ProAves, Ana shared her personal experiences of the reserves that ProAves has been able to initiate with funding from WLT.

She described how she had the opportunity to help create Las Tangaras bird reserve, some 7,000 acres (2,830 hectares) of tropical forest in the Chocó department of Colombia, one of the world’s biodiversity hotspots. The reserve shelters several species of birds and frogs in danger of extinction but, as Ana explained, its unique flora and fauna need constant protection from the threats of deforestation, gold mining, hunting and illegal trafficking.

She said: “I have seen how important the help of World Land Trust is in working with local communities to protect forests and endangered species.”

Ana had also had her own encounter with a Spectacled Bear: “I had the good fortune to see a male Spectacled Bear in the Colibri del Sol Reserve in Colombia. Normally a shy species, he just looked at me and carried on eating, knowing that he was safe,” she said.

Andrew painted the work Spectacled Bear earlier in the year specifically for the auction. He said: “The bear is a wonderful subject because its essence can be conveyed very simply, and the toucan is an iconic symbol of the jungle.”

The painting was bought by Jane Cooper as a 40th wedding anniversary present for her husband. An art collector and Wandsworth resident, Jane said: “It’s very important to preserve these habitats. We have to protect land for animals and I am very happy to be supporting World Land Trust.”

Judy Stafford curated the exhibition and organised the auction. She said: “We are delighted to be donating more than £2,000 to World Land Trust – and at the same time to have been able to raise awareness of the Trust and its conservation work.”

Robert Giles, a WLT Council member and another Wimbledon resident, represented the Trust at the event. He said: “We are particularly grateful to Andrew for donating the work and to Judy for organising the auction.”

Of the donation, Andrew said: “It’s a drop in the ocean but any important movement for change requires little steps and the more people there are taking little steps, the stronger the movement.”

Spectacled Bear and other works in the current exhibition reflects Andrew’s move towards more abstract art. “I am using minimalist imagery to express the diversity and complexity of the environment and ecosystem, ranging from the morphology to the minutiae,” he said.

WLT protects habitat for Spectacled Bears in Colombia and Ecuador. Pictured (right) is a recent image of a Spectacled Bear in Antisanilla. The photograph was taken by a ranger working for Fundación Jocotoco, one of WLT’s conservation partners in Ecuador.

You can help World Land Trust purchase and protect more habitat for Spectacled Bears in Colombia and Ecuador by making a donation to Buy an Acre. Please help us save real acres, in real places.