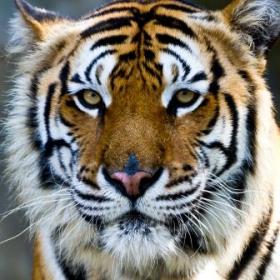 Inspired by the success of Big Match Fortnight in 2013, World Land Trust (WLT) is holding another match funded appeal in October 2014.

Big Cat Big Match Fortnight will be launched at an evening event in the lecture theatre of the Linnean Society of London on Tuesday 30 September.

This year the focus for the fundraising fortnight is big cats, the majority of which are declining in numbers. WLT’s overseas partners protect big cats on many of their reserves and the aim of this appeal is to fund more land purchase and protection across their ranges.

Donations will be matched

John Burton, WLT Chief Executive, explains the thinking behind Big Match Fortnight: “A year ago, the prospect of World Land Trust raising a million pounds to save a wildlife corridor in the Bornean rainforest was a dream. But, in less than a year, and thanks to the success of Big Match Fortnight and the outstanding generosity of our supporters, fantasy became reality when we reached the million pound target. Big cats are top predators and by protecting large enough, continuous habitat for them to live in and roam through we are, in effect, saving all the other biodiversity of the reserve. I hope donors will respond as generously as they did last year to help us save space for big cats.”

Guest speakers will include Dr Isabelle Lackman, from Hutan, WLT’s conservation partner in Malaysian Borneo, which was the beneficiary of Big Match Fortnight in 2013.

During a WLT field trip to Sabah in 2012, Isabelle described to a group of WLT donors exactly how Hutan could protect a wildlife corridor for Bornean Orang-utans by purchasing small parcels of forest along the Kinabatangan river. Isabelle’s vision would be possible, she explained, “if only I had a million pounds”.

Through Big Match Fortnight 2013 WLT was able to raise the million pounds that Hutan needed. At the launch of Big Match Fortnight 2014, Isabelle will illustrate how the funds raised in 2013 have saved these parcels of land and the lives of Orang-utans, Pygmy Elephants and other threatened wildlife in Sabah that depend on continuous habitat.

Focusing on Big Cat Big Match 2014, Vivek Menon, Executive Director of Wildlife Trust of India, will give the latest facts and figures on the status of the Bengal Tiger in India, and describe how funds raised through Big Cat Big Match can protect tigers in the wild in India.

Vivek explains: “In India we are caught in a triangular playing field between the values and ethics we had in the past, the reality of being home to a third of the world’s poor, and the aspiration for nine per cent economic growth. So between these three parameters we must eke out pieces of land where we can protect our large animals and reduce human-wildlife conflict. We have a very strong conservation past, but an extremely challenging future and we are very grateful for the help of WLT supporters.”

Other speakers will talk about other ‘stars of the catwalk’ including Iran’s Asiatic Cheetah and Armenia’s Caucasian Leopard.

The event is free, but tickets are needed as places are limited. WLT Friends have priority booking until 5pm on 5 September. Attendance is then open to the general public.

More details of the event »