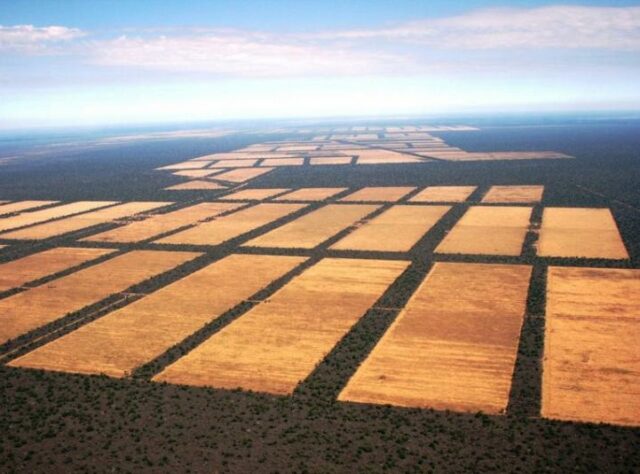 If it takes you a minute to read this article, by the time you get to the end of the page another hectare – or 2.5 acres – of Gran Chaco forest will have been destroyed.

This startling fact has been revealed by a study of satellite imagery by Guyra Paraguay (Guyra), a conservation partner of World Land Trust (WLT).

The loss of Chaco forest, which covers parts of Argentina, Bolivia and Paraguay, is now proceeding at a rate of 63 hectares per hour (156 acres), or 1.05 hectare (2.5 acres) per minute.

Paraguay accounts for the largest share of the woodland that was converted to agricultural use in June 2014, with 72% of the total deforested area; Argentina had 23% and Bolivia 2%.

In Paraguay, the rate of deforestation was 1,080 hectares (2,669 acres) per day. As worrying, deforestation was observed in areas within the Protected Area of the Médanos del Chaco National Park as well as in areas adjacent to the park. (Some deforestation is legal, under licence, in Paraguay, and Guyra Paraguay cannot judge the legality of the change of use of the areas of land identified.)

John Burton, WLT Chief Executive, has recently returned from Paraguay where he visited the Paraguayan Chaco and saw that whole new areas of forest have now been cleared. “Considering the extraordinary biodiversity of the Gran Chaco, deforestation on this scale is a tragedy,” he said.

Rodrigo Zaraté, Sites and Conservation Units Manager for Guyra Paraguay, was in the UK in August. “For its size, Paraguay now has the highest rate of deforestation of any country in the world. We cannot allow any more biodiversity to be lost,” he said.

The main threat to the biodiversity of the Gran Chaco is cattle ranching. But although there is a ‘quick buck’ to be made in livestock farming, Rodrigo believes that cattle ranching will prove to be economically counterproductive in the long run.

“Farmers can harness the economic value of the natural environment without destroying it.”
Rodrigo Zaraté, Sites and Conservation Units Manager, Guyra Paraguay

“Farmers can harness the economic value of the natural environment without destroying it,” he said. “There are profitable alternatives to beef production and it’s important that farmers know that they can generate income from organic farming, for example, or sustainable timber extraction, payments for ecosystem services and agritourism.”

In partnership with the University of East Anglia and Guyra, WLT is supporting a scientific expedition to the Paraguay, planned for 2015. The aim of the expedition is to study the genetic makeup of species in the Paraguayan Chaco. But, by the time the expedition arrives, another million hectares of forest will have been lost. And it’s likely that species will also disappear.

For more information, please contact the Geoprocesamiento team at Guyra Paraguay at the following address:  geoprocesamiento@guyra.org.py