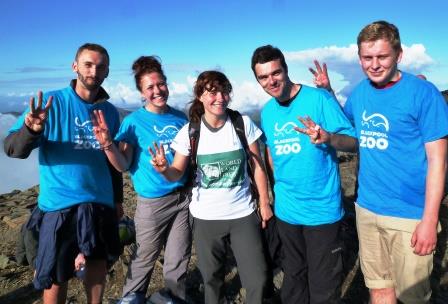 During the challenge, the team from Blackpool Zoo (raising funds for WLT), joined forces with other zoo keepers from around the UK, who were fundraising for Selamtkan Yaki, a charity dedicated to the conservation of Crested Black Macaques in North Sulawesi, Indonesia.

After the event Samantha Barkess, former Primate Keeper at Blackpool Zoo and the team leader, told us: “It was one of the hardest things I have done, but I am so delighted we completed it and raised money and awareness for World Land Trust. We did it in 27 hours, which is fantastic considering the size of the group (16 in total). I’m really happy, as I have managed to raise over £900, and the others have done a great job in raising another £700!”

The challenge started in Scotland. Ben Nevis was the first and the highest peak of the three and the team trekked through snow before reaching the summit as the clouds lifted to reveal stunning views of the valleys below.

By the end of the first day the team had reached Scafell Pike in England, where they climbed in the warmth of the end of the day, with the sun setting over the mountains. The views were beautiful but with dark approaching the team had to finish the descent by torch light.

From there the group travelled through the night to Snowdonia in Wales, where with stiff legs and complaining muscles, they pushed themselves to the top of Snowdon and back down in the small hours of the morning, determined to complete their challenge.

“It was truly an amazing experience and one I will never forget, made all the better for the generous donations I received for my challenge going to such a worthy cause,” said Samantha.

Donations from the Blackpool Zoo team will be divided between WLT’s Action Fund and BIAZA Buy an Acre, an initiative to raise funds to purchase and protect land in Mexico’s Sierra Gorda. WLT is managing BIAZA Buy an Acre in partnership with the British and Irish Association of Zoos and Aquariums (BIAZA).

BIAZA members have already raised £10,000 and funds from the Blackpool Zoo team will help take BIAZA Buy an Acre towards its target to raise £20,000 by the end of the year.

“By emphasising the importance of supporting local conservation groups, WLT is different from other charities,” said Samantha. “We chose to support WLT because the funds raised will help towards the purchase and permanent protection of rainforests and other wildlife habitats that are crucial for the survival of endangered species.”

Samantha was formerly Primate Keeper at Blackpool Zoo, and has recently moved to Knowsley Safari Park. Other members of Blackpool Zoo’s Three Peaks Challenge team were John Paul Houston, Head of Section for birds and reptiles, Connor Blackburn, a Seasonal Keeper in the events section, Matthew Cullen in catering, and Laura Murgatroyd, another Seasonal Primate Keeper.

You can support this fantastic effort by donating to one of these two fundraising pages:

Since WLT was founded in 1989, hundreds of people have supported the Trust by raising donations through their own individual efforts.

To mark WLT’s 25th Anniversary year, we have a growing number of Anniversary Fundraisers, individual supporters who have pledged to raise funds between May 2014 and May 2015.

We have plenty of tips for individual supporters on our fundraising pages. If you are looking to stretch yourself and raise funds for WLT, you might like to consider taking on an Action Challenge »