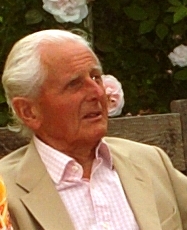 John Burton, Chief Executive of World Land Trust, remembers Philip Wayre, who played a key role in the revival of the otter in Britain. Philip died in June, aged 93.

I first came across Philip in the early 1970s when I was working with Friends of the Earth (FoE). Angela King, the Wildlife campaigner for FoE and I met Philip when he was trying to find a location for the Otter Trust so that he could start a breeding programme for European Otters (Lutra lutra), for eventual reintroduction.

He settled on Earsham on the Suffolk-Norfolk border, and I was later invited to sit on the board of the Otter Trust, which opened to the public in 1978.

At that time Philip was well known as a TV presenter, as well as author of many books on wildlife, and he had already founded the Norfolk Wildlife Park, which specialised in European wildlife. I particularly recall a splendid enclosure with European Lynx (Lynx lynx), and I also remember European Bison (Bison bonasus), Wild Cat (Felis silvestris), and of course otters. The Wildlife Park was sold in 2000 and closed in 2011, but Philip’s activities had been centred on the Otter Trust since the mid 1970s.

The story of the Otter Trust is one of the great conservation successes of the 20th century. It worked at all levels: breeding otters in captivity, monitoring the declining otter population, installing artificial holts for otters to shelter and breed in, raising public awareness, lobbying for protection. In fact there was hardly a technique for conservation that was not used. And of course the Otter Trust worked with numerous other bodies, including the statutory conservation organisations, FoE and county wildlife trusts.

The first captive bred otters were released in 1983, and 130 had been released all over southern England by 1996. This soon led to the recovery of the otter populations in the wild, and, while the otter population is still only about half that of the first half of the 20th century, it is well on the road to recovery.

The Otter Trust closed in 2006, its job done. By that time Philip was able to know that wild otters were once again breeding in the Waveney Valley, which bordered the Trust’s property. The site of the Otter Trust is now home to the River Waveney Trust, a charity founded in 2012.