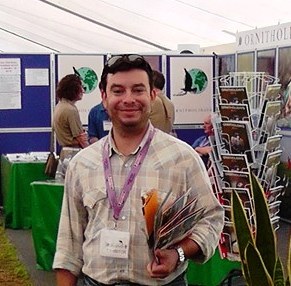 We are pleased to announce the final line-up for World Land Trust’s (WLT) stand at Birdfair in August.

Rodrigo Zaraté of Guyra Paraguay is now confirmed as the fourth and final guest on WLT’s stand. Rodrigo is Sites and Conservation Units Manager for Guyra Paraguay, WLT’s programme partner in Paraguay. He is familiar with Birdfair, having joined WLT at their stand in 2012.

Ecotourism is a priority for Guyra Paraguay. It enables the NGO to show international visitors the country’s natural treasures and it is an important source of income for conservation. Earlier in the year, Guyra was selected to receive a major grant to help develop an international ecotourism project focusing on birds.

Representatives of Guyra Paraguay have joined WLT’s stand in previous years, and visitors to Birdfair are always keen to find out about this remote, but fascinating, birdwatching destination. Rodrigo will be on hand to discuss the wonders of wildlife watching in Paraguay, with some useful tips for those interested in birdwatching holidays.

Swarovski Optik has generously donated a pair of binoculars as a prize for WLT’s Birdfair competition.

Entry into the competition to win the binoculars will be open throughout Birdfair on the WLT stand. The winner will be drawn by Bennett Hennessey in the week following the event.

Following the success of their joint appearance at Halesworth Arts Festival in 2013, Bill Oddie and Sarah Class will be performing A Musical Flight in the Birdfair event marquee on Saturday 16 August at 5pm.

Sarah is the composer of the soundtrack of the BBC series Africa, and the event is in support of WLT’s 25th Anniversary. Do join us for the performance, it is sure to be entertaining.