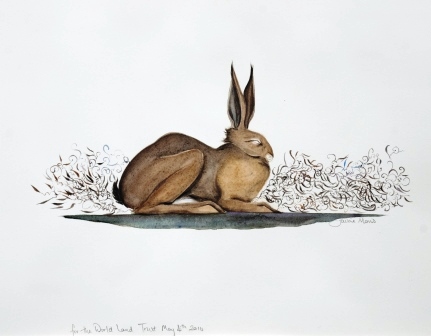 Artist Jackie Morris has donated two watercolours to raise funds for World Land Trust (WLT). One of the works has already been auctioned and all proceeds from the sale of both pictures will support WLT’s conservation work.

Jackie painted Sleeping Hare while in residence at WLT art gallery during her Song of the Golden Hare exhibition earlier in the year.

Bids will be accepted for this original watercolour until midday on Friday 5 September 2014.

The mounted, unframed picture (illustrated above) is available to view at WLT art gallery. It measures 50 x 39.5cm including the mount.

A second donated watercolour has already been sold by auction. Following the Song of the Golden Hare exhibition, Jackie painted another picture and organised its sale.

“The beautiful picture achieved a final bid of £300, so thank you very much to Jackie and to the buyer,” said Kelly Jacobs, WLT’s Outreach Manager.

Popular artist returns to Halesworth »
Song of the Golden Hare »