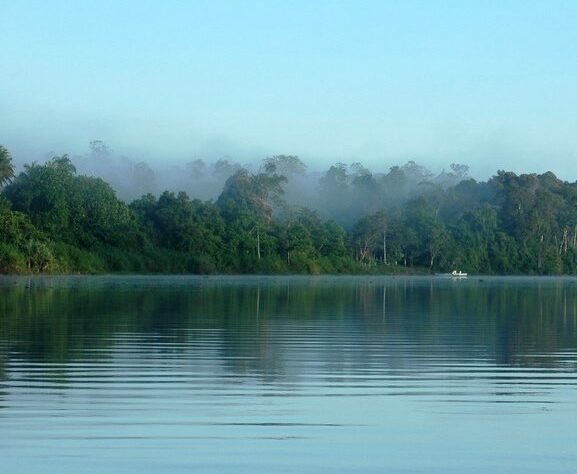 The figures were announced at WLT’s AGM, which was held in Suffolk on 18 June 2014.

During the AGM, conservation staff described developments in WLT’s approach to conservation, which is focused at the landscape level.

Throughout the floodplain of the Kinabatangan River in Sabah, Borneo, there is a patchwork of protected areas which are becoming increasingly fragmented by land use change driven by palm oil production.

WLT is supporting its local partners in Sabah to combat this fragmentation by funding strategic  land purchases which connect these reserves. Working with local communities, government bodies, and the palm oil sector, the aim is to create a contiguous riverine corridor which will benefit wildlife and protect the river from sedimentation and agricultural run-off.

While individual transactions may be small, in the broader context they are highly significant and strengthen the resilience of the landscape.

During the AGM, David Wright, WLT’s Head of Programmes, recognised WLT’s success in developing a highly effective conservation strategy based on land purchase. He also acknowledged that this approach is becoming increasingly challenging as global land prices escalate, largely in response to land conversion for agriculture.

In response to this challenge, in recent years, WLT has diversified its approach to acquire land use rights through the negotiation of land leases, including those financed by the private sector for the purposes of carbon sequestration.

Looking ahead to the next 25 years, David set out a vision for the Trust that involves working ever closely with conservation partners and other stakeholders to reduce the impacts of land use change and to implement landscape level conservation programmes linked to broader regional conservation initiatives.

He explained: “This approach will require us to develop longer programme planning cycles which will expose us to greater opportunities for match funding, grant income and other sources of funding. This will help us to maximise our conservation impact and further strengthen our Conservation Alliance of partner NGOs.”

Throughout its 25 year history WLT has shown itself to be extremely flexible, able to seize opportunities and adapt to changing circumstances. As WLT has matured as an organisation so too has the knowhow of its staff, Trustees, Council members and partners. As WLT prepares to meet current and future challenges, it is that versatility, skill and experience that will provide the springboard for the next 25 years of successes.