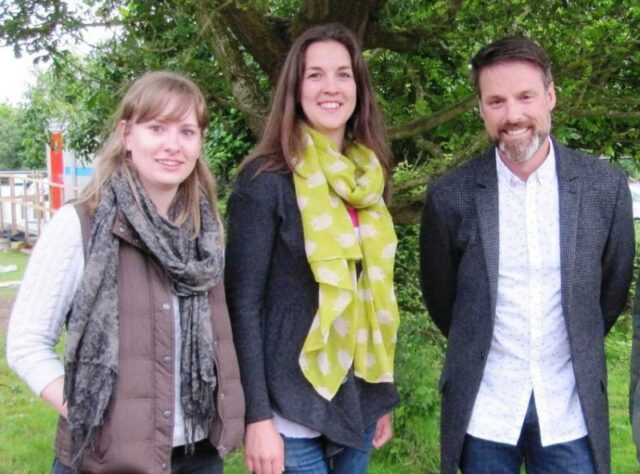 RSPB Minsmere on the Suffolk coast was a perfect location for Springwatch 2014. Not just is it a beautiful reserve, but it is conveniently just a few miles from the WLT offices in Halesworth and most WLT staff know the reserve well.

Dan Bradbury, WLT’s Head of Digital Communications, was one staff member who went on set. His sketch of a Redstart was featured on Springwatch Unsprung Tuesday on 3 June 2014.

The following night, three others were in the audience: Mary McEvoy and Charlotte Beckham from WLT’s programmes team and Kelly Jacobs from WLT’s communications team.

The three of them watched WLT Patron Chris Packham live on camera with Michaela Strachan and Martin Hughes-Games. They also chatted to Springwatch Unsprung presenter and WLT supporter Nick Baker about his recent trip to Paraguay with John Burton WLT Chief Executive.

“We really appreciated Nick Baker taking the time to chat with us before the live recording of Unsprung and, of course, it was great to see Chris Packham in action,” said Kelly, WLT’s Education, Outreach & Training Manager.

Mary, WLT’s Conservation Programmes Manager, commented: “Catching up with Nick about his field trip to Paraguay was fascinating. You could tell how much he enjoyed the visit which he described as ‘incredibly eye-opening’. Until going there he hadn’t previously realised the scale of the challenges faced by Guyra Paraguay, WLT’s partner in Paraguay.”

By chance, Charlotte, Kelly and Mary had also been in the studio audience for the BBC recording of Nick’s appearance on Celebrity Mastermind in 2013, when his chosen charity was World Land Trust..

Charlotte said: “It was lovely to see Nick looking so relaxed compared to when we saw him last year during the recording of Celebrity Mastermind. Although Celebrity Mastermind is pre-recorded, the Mastermind chair, the music, the atmosphere, they’re enough to terrify anyone and we were all super-tense!”

Springwatch 2014 is on BBC2 at 8pm Monday-Thursday 9-12 June. Springwatch Unsprung 2014 is on the red button after Springwatch Monday-Wednesday 9-11 June and on BBC2 on Thursday 12 June.