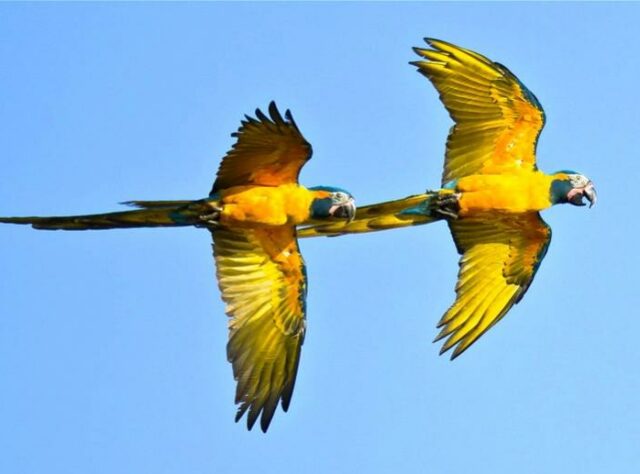 Bennett will be joined on the WLT stand at the Rutland Birdfair on 15/17 August by WLT staff and a representative from Guyra Paraguay.

In 2013 WLT supported Armonía with funding for a land purchase to extend the Barba Azul Nature Reserve, which is owned and managed by Armonía. The reserve is a haven for one of Bolivia’s most iconic bird species, the Blue-throated Macaw, and a must-go-to-see destination for dedicated birdwatchers.

“Being at Birdfair will give me a great opportunity to talk to keen bird watchers about the wonderful range of bird species that are found at Barba Azul Nature Reserve, and the possibilities for ecotourism that the reserve offers,” said Bennett.

Barba Azul in Bolivia’s Beni savanna is the only site in the world that is home to large groups of Blue-throated Macaws, which are registered as Critically Endangered on the IUCN Red List. The reserve is a wildlife oasis in an area dominated by cattle ranching, and shelters rare mammal species including Maned Wolf, Giant Anteater, Jaguar and Puma.

As part of its conservation strategy, staff of Armonía are developing ecotourism in Barba Azul, and at the nearby Red-throated Macaw Reserve, as an alternative funding stream for conservation.

Bennett Hennessey was in London in May for WLT’s 25th Anniversary Partners Symposium. During his visit he talked about the importance of conserving the forest islands of Beni for the Blue-throated Macaw, and the role of ecotourism in reserve management.

Over the years Birdfair’s support for international bird conservation has benefited birds in Barba Azul Nature Reserve. In February 2014, for example, Birdfair made a donation of £270,000 to Birdlife International’s Global Flyways programme.

WLT is supporting Asociación Armonía with Buy an Acre funding to extend the Barba Azul Nature Reserve to give greater protection to the Blue-throated Macaws and other birds of the Beni Savanna. You can support these conservation efforts by donating to Buy an Acre.

Now is the time to Buy an Acre in Bolivia »