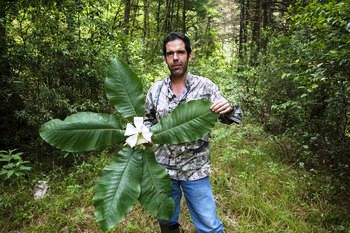 Three new species of magnolia have been discovered in Sierra Gorda thanks to Roberto Pedraza Ruiz, Technical Officer of Grupo Ecológico Sierra Gorda (GESG) – and one of the new species has been named after him!

GESG is the Mexican conservation partner of World Land Trust (WLT), which has been supporting conservation in Sierra Gorda since 2007.

The discoveries were confirmed in late 2013 and, during the first few months of 2014, Roberto has been recording information about the species at the request of magnolia specialist Dr José Antonio Vázquez who is completing their description.

Roberto told us how the discoveries came about.

He first photographed the magnolias in 2009 and shared the pictures with ARKive as they were initially thought to be known species.

Sometime later, Dr Vázquez came across the pictures on the ARKive website and spotted that they had not been correctly identified.

He contacted Roberto to ask for more photographs in order to confirm that they were indeed new species.

“So it was by chance a joint discovery, and because I shot the photos, Dr Vázquez decided to give one of them the name pedrazae,” said Roberto.

The other two species are named rzedowskii (after Dr Jerry Rzedowsky, the leading botanist in Mexico) and sierragordae.

Roberto is delighted by the discoveries. “To find three new tree species in central Mexico, where supposedly everything has been labelled, is quite outstanding,” he said.

“Magnolias are living fossils and the first flower plants on the planet,” he explains. “They are amazing trees! Micro-endemic and new to science. We are so proud to be protecting the only places in the world where they are found.”

Roberto has been monitoring the flora and fauna of Sierra Gorda since the 1990s and the contribution that he and his parents have made to botany and conservation in the central Mexican state of Queretaro has been immense.

Their achievements have been recognised in many awards, but for Roberto, the highest accolade yet is the naming of a new species after his family.

Roberto sent WLT photographs of the magnolia flowers. The picture at the top of this page shows Roberto holding up the flower of the rzedowskii species. The other picture shows Roberto father, Roberto Pedraza Muñoz, with the pedrazae magnolia.

About the naming, Roberto said: “It is quite an unexpected surprise and truly an honour – and by my standards far more important than a gold medal. The reserve where they are found was formed back in 1996 thanks to my parents. If it hadn’t been for them those trees and their habitat would have disappeared long ago. So I’d like to think that the name pedrazae is for my parents, Roberto and Pati.”

World Land Trust supports GESG with funds to extend existing reserves and to employ two wildlife rangers. You can help protect rare species – some of which may not yet have been discovered – by donating to either Buy an Acre or Keepers of the Wild.