Le Quoc Hieu is one of two wildlife rangers supported by World Land Trust’s (WLT) Keepers of the Wild programme in the proposed protected area of Khe Nuoc Trong, where WLT is supporting a Carbon Balanced project.

Khe Nuoc Trong lies in the Truong Son mountain chain, which has an extraordinary diversity of plants and animals. The abundant flora and fauna has 987 plant species belonging to 539 genera, 141 families including 163 endemic species, 54 rare species listed in the Red Data Book of Vietnam and 26 species in the World Red Book (Investment Plan for the proposed Khe Nuoc Trong Nature Reserve).

Quoc Hieu has not seen either of Khe Nuoc Trong’s rarest species – Edwards’s Pheasant (Lophura edwardsi)  and the Saola (Pseudoryx nghetinhensis). Few people have, but he remains optimistic: “I have always wanted to see a Saola because it’s a valuable species for conservation. And it’s well suited to the terrain, climate and food sources in Dong Chau forest.”

As yet there are no camera-traps in Khe Nuoc Trong, so when possible he records species with his camera phone.

At the moment there are few visitors to the reserve, something that Quoc Hieu would like to see change. “I would love to take guided tours because I could raise the awareness of biodiversity conservation and the importance of managing natural resources,” he says.

Quoc Hieu recognises that his work is important particularly in the context of climate change: “This is important work because we are protecting biodiversity and the natural landscapes that assists in regulating the global climate.”

On his daily foot patrols Quoc Hieu must be ready for emergencies such as forest fires and illegal logging. He explains: “I have encountered both hunters and poachers. When they have home made guns, knives and crossbows, then the situation can get out of control, but if that looks likely to happen I call the station chief for back up.”

Quoc Hieu is highly motivated and dedicated to his work, which can undoubtedly be frustrating at times. He explains: “Sometimes I can’t protect the forest as well as I’d like due to hazards such as hunters and poachers with weapons. In addition, hilly terrain and severe weather conditions such as strong wind and heavy rain hinder the patrol and reserve management. The forest is large and there are so many risks in there and our equipment and resources are limited.”

Quoc Hieu is keen to acquire new skills to assist his work: “I would benefit from training in plant and animal identification, in species surveying, data collection and processing to enhance my professional competence.”

He has been a ranger at the Management of Dong Chau Protected Forest since 2010. Since becoming a ranger his life has changed: “I’ve become more responsible for myself, my family and society, more careful in the way I speak to people. My daily life has become more flexible as I’ve had to adapt to the different demands of my work.”

WLT raises funds through the Keepers of the Wild appeal to support wildlife rangers, who work hard to protect some of the most threatened habitats and wildlife on Earth. 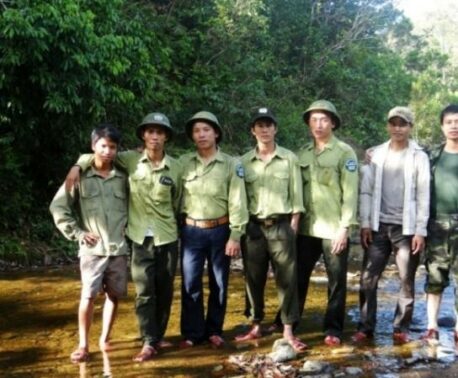 Following the recruitment of two wildlife rangers and the launch of World Land Trust’s (WLT) Carbon Balanced project in Vietnam, …