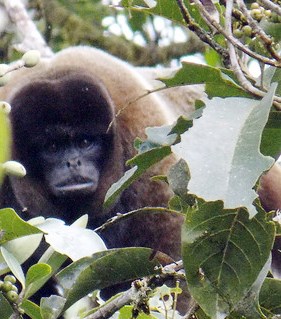 Luis Recalde, a wildlife ranger supported by World Land Trust (WLT) has recorded a resident troop of Woolly Monkeys, one of the most impressive species in Rio Zuñac Reserve.

The Woolly Monkey is the largest South American primate, and the species that Luis recorded was Lagothrix lagotricha subspecies poeppigii, which is registered as Vulnerable on the IUCN Red List.

Rio Zuñac Reserve is owned and managed by Fundación EcoMinga, one of WLT’s partners in Ecuador. Luis’s employment is supported by WLT’s Keepers of the Wild fund.

“The species faces many threats, and is rarely seen, so it was an exciting encounter for the ranger,” said Lou Jost of EcoMinga.

Woolly Monkeys are the natural prey of Andean Black-and-chestnut Eagles, which are capable of snatching a monkey and flying with it dangling from their claws. However it is not the Andean Eagle that poses the real danger to the Woolly Monkey. Rather it is human hunters.

“Woolly Monkeys have been largely eliminated from areas near human settlements. They are in urgent need of protection.”
Lou Jost, Fundación Ecominga

Woolly Monkey meat forms part of the diet of most indigenous Amazonian communities. Traditionally the meat is consumed during festivals but such is its popularity that some indigenous communities are now hunting Woolly Monkeys to supply the bush meat trade in nearby towns.

And it’s not just the indigenous who hunt the Woolly Monkey. So too do incomers who are invading forest areas.

“With advances in hunting technologies, increased human population density, and changes in indigenous lifestyle from nomadic to sedentary, Woolly Monkeys have been largely eliminated from areas near human settlements. They are in urgent need of protection,” explains Lou.

Rio Zuñac Reserve lies in the eastern foothills of the Andes on the western edge of the Amazon basin, and has not been inhabited by indigenous communities for many centuries.

So, unlike in the Brazilian Amazon, where Woolly Monkeys have learned to stay well away from people, in Rio Zuñac Reserve, Woolly Monkeys respond less cautiously to human encounters. They may not react at all or males may even approach an observer and try to scare him or her away with threat displays.

“We hope that we can protect this trusting, local population of Woolly Monkeys from human threats.”
(Lou Jost, Fundación Ecominga)

These expeditions often occur just before fiestas, and usually involve many hunters, who stay in the field for many days. They smoke the meat they obtain in the field, to preserve it until the fiesta.

Recently a guard for the national park caught one such expedition and confiscated many smoked Woolly Monkey carcasses. EcoMinga’s guards and the national park guards have recently begun to work together. “We hope that we can protect this trusting, local population of Woolly Monkeys from human threats,” said Lou.

Climate change also threatens the Woolly Monkey. There are signs that unusual climate variations are desynchronising the flowering and fruiting cycles of east Andean trees in Ecuador.

Fruit is the main food of Woolly Monkeys, and the monkeys move around the forest to take advantage of mass fruitings of specific species at specific elevations.

“Desynchronisation of these fruiting events may stress our monkey populations, though no one really knows what will happen,” said Lou. “Here all we can do is protect the monkeys from the threats that we can control, and hope for the best as climate changes.”

The mere presence of rangers in reserves is enough to deter to hunters, so the work of Luis and other Keepers of the Wild is essential to protect rare species in protected areas supported by WLT.

From hunter to protector: a life-changing conversion »