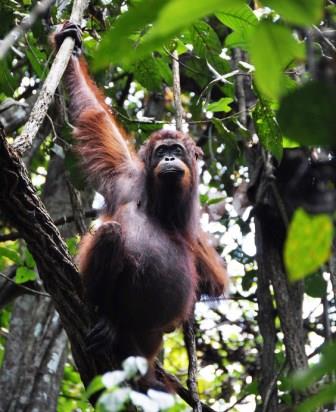 Less than a year after launching the Borneo Rainforest Appeal, World Land Trust (WLT) has raised one million pounds to save the Keruak Corridor in the Lower Kinabatangan floodplain of Sabah, Borneo.

John Burton, WLT Chief Executive, commented: “Meeting the million pound target for the Borneo Rainforest Appeal is a landmark in the Trust’s 25 year history. The scale of our achievement in Borneo renews my confidence in the Trust’s ongoing ability to raise the funds that are so desperately needed to stem the tide of habitat destruction worldwide.”

The Borneo Rainforest Appeal was organised in partnership with Hutan, WLT’s conservation partner in Malaysia.

Dr Isabelle Lackman, Co-Director of Hutan, said: “Thanks to the extraordinary generosity of World Land Trust’s supporters and partners, we are now in the process of purchasing and permanently protecting a strategically important corridor of forest along the River Kinabatangan. The protection of the forest is crucial for the protection of species, and by connecting forests that are fragmented we know we can save viable populations of Orang-utans.”

To promote the Borneo appeal abroad, WLT joined forces with Rainforest Trust, a US-based non-profit conservation organisation. A donation from Rainforest Trust on the eve of WLT’s 25th Anniversary brought the appeal total to one million pounds.

WLT continues to raise funds for strategic land purchase in Sabah in partnership with Hutan. Future donations will be used to extend the Keruak Corridor and to identify and protect new corridors in Kinabatangan.

The announcement was made during a celebration of WLT’s 25th Anniversary in London on Tuesday 6 May 2014. The evening event at the BAFTA Theatre was hosted by WLT Patron, Sir David Attenborough, and commemorated WLT’s conservation successes of the past quarter century.