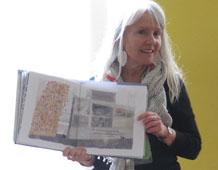 Children from Edgar Sewter Primary School have planted a Jubilee Oak on Millennium Green in Halesworth during an educational event organised by World Land Trust (WLT).

The planting took place during the first week of The Promise, a new exhibition at WLT gallery, which celebrates tree planting, urban renewal and personal transformation. The tree was planted close to the Edgar Sewter copse, which was planted in early 2014 and dedicated to the school for future study and recreation.

Taking part in the school activity were Nicola Davies, author of The Promise, and artist Laura Carlin, whose original illustrations for The Promise are on display in WLT gallery.

Inspiration for the activities came from WLT and the event was organised by Kelly Jacobs, WLT’s Education & Outreach Manager. Also involved were volunteers from Millennium Green, who helped the children plant their own oak tree.

Sue Chater, teacher at Edgar Sewter school, was very positive about the activities. “The school was delighted to be given such a marvellous opportunity to work with an author and an illustrator of Nicola and Laura’s calibre. Sal Jenkinson from the Millennium Green Trust also enhanced the children’s learning experience in arranging for the children to plant their very own oak tree; they were excited about having their own special Edgar Sewter copse to care for,” she said.

The event took place during National Science and Engineering Week on 19 March 2014. During morning assembly Nicola Davies gave a stirring reading of The Promise. This was followed by the tree planting at Millennium Green which involved 27 pupils from Year 3. Afterwards Nicola and Laura returned to the school where they helped the children to think up a Promise to the Planet, the subject of a WLT competition.

“When we got back to school Nicola and Laura’s support for the children as they thought about the promise they would like to make led to some truly inspiring ideas. The children thoroughly enjoyed their learning and we would all like to thank you for helping make our Science Activities day a truly memorable one,” said Sue.

Nicola and Laura were also both very enthusiastic about the activities. “The effects of tree planting, particularly in an urban environment, are profound, and the central message of The Promise is transformation – on a personal level and on environmental level. The book speaks to a huge variety of people, and even the very young understand the emotional side of the story,” said Nicola.

The Jubilee Oak was planted as part of the Woodland Trust’s Plant Trees in your Community initiative. “We were very pleased with the tree planting and huge thanks to World Land Trust for organising it,” said Sal on behalf of Halesworth Millennium Green Trust.

Children’s author Nicola Davies will be in Halesworth Library on Wednesday 16 April for a morning session with the Library’s Time Out group and an afternoon of storytelling and craft activities for children. Details »

The Promise exhibition is at WLT gallery until 25 April. Opening times »

The closing date for Promise to the Planet competition entries is 16 April 2014 at 4pm. Terms and conditions »