Symposium will focus on strengthening the Conservation Alliance SEARCH NEWS 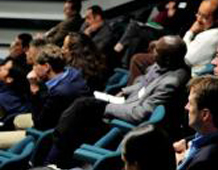 Strengthening the Conservation Alliance of the partners of World Land Trust (WLT) will be on the agenda of the Trust’s 25th Anniversary Symposium in May.

Partnerships have been at the heart of WLT’s conservation work since it  was founded in 1989. Strong partnerships are essential to the success of WLT funded programmes, which depend on local NGOs for effective implementation.

Today WLT offers a level of support that focuses on partners’ priorities – not only land protection, but also in terms of the conservation challenges they face.

“Between them, WLT’s partners have a phenomenal depth of conservation knowledge and experience. WLT has a key role to play not just in providing funding, but also in facilitating communication, skill sharing and the exchange of technical information between partners,” explains David Wright, who joined WLT as Head of Programmes in 2014.

John Burton, Chief Executive of WLT, has been at the helm of WLT for the past 25 years. He believes the time is right for strengthening the Conservation Alliance.

“The Anniversary Symposium comes at a pivotal moment, not just for WLT, but for conservation in general,” John explains. “With the human population continuing to expand, and the planet’s biodiversity ever more threatened, we are in a race against time. The question is, can we be more effective and achieve more by working even more closely together?”

After 25 years, WLT has 29 partnerships in 20 countries with NGOs that share a common goal of conservation through habitat protection.

WLT’s partnership network is made up of established NGOs many of which are, at heart, community organisations. “I believe that the development of an international alliance of conservation organisations with strong local roots offers a platform for tackling the global environmental crisis,” said John.

WLT’s 25th Anniversary Partners Symposium is by invitation only. The event will take place at the Royal Botanic Gardens, Kew, from 6-9 May 2014.

In addition to its 29 programme partners, WLT has extended its network to include other organisations whose aims and objectives fit with those of the WLT. These include: Rainforest Trust (formerly World Land Trust-US), IUCN National Committee of the Netherlands, BirdLife International, American Bird Conservancy and Acciónatura.