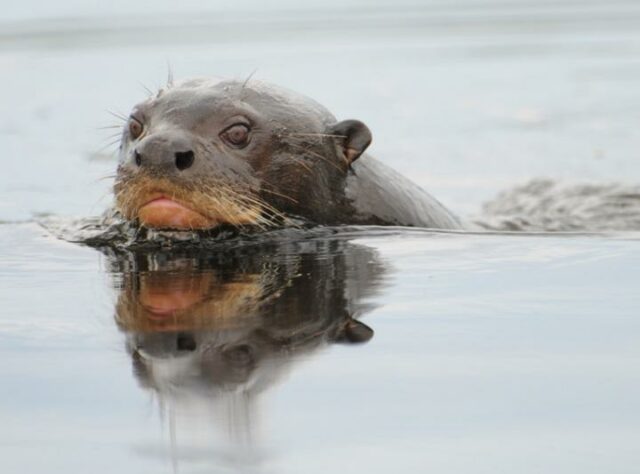 Two dens of Giant Brazilian Otter (Pteronura brasiliensis) have been recorded west of the Rio Negro in the Chaco-Pantanal Reserve, which is owned and managed by Guyra Paraguay, a partner of World Land Trust (WLT).

The dens were observed late in 2013 and camera traps were installed near the dens to monitor the site round the clock for a week. This is the first time camera-trap videos have recorded Giant Otters in the Chaco-Pantanal Reserve.

Giant Otters are listed as Endangered on the IUCN Red List and it is humans that pose the greatest threat to their survival. Humans hunt Giant Otters illegally for their velvety fur and meat, or capture them alive for the pet trade.

Films of Giant Otters rearing young in the wild are rare because these animals are extremely wary of human presence. The adult Giant Otter has few predators, but cubs are vulnerable to attack from Caiman and Jaguar, and require close protection in the first weeks and months of life.

Giant Otters build their dens in riverbanks, and give birth inside the dens. Otter cubs are born blind and remain so for the first four weeks of life. After they open their eyes, they begin walking in the fifth week and join other family members in the water when they are between 12 and 14 weeks old.

The female otter’s breeding cycle usually coincides with the dry season when water levels are at their lowest and fish concentrations are at their highest. Parents and older siblings cooperate to catch prey for the new pups, and an abundance of prey makes it easier for adults in the family group to catch enough fish to feed the young.

WLT funds rangers at Three Giants Biological Station to protect and monitor wildlife in the Chaco-Pantanal Reserve. You can help keep Giant Otters safe by making a donation to Keepers of the Wild.