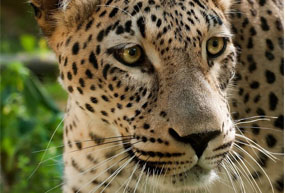 Thanks to amazing support from the public, Saving Armenia’s Leopard – a World Land Trust (WLT) project – has won a grant of €30,000 from the European Outdoor Conservation Association via a poll run in conjunction with National Geographic Germany.

During the second half of March 2014, more than 52,000 online votes were cast for 17 conservation projects all vying for funding from three top magazines. Featured in National Geographic Germany (NGG) and on NGG’s website alongside five other competing projects in the Nature category, Saving Armenia’s Leopard won 7,238 votes out of total of 21,179 votes cast in the category (34%).

WLT’s project led the Nature category poll from the beginning but during the final weekend of voting, a late surge in votes for the other projects, gave us a nervous moment.

WLT’s conservation partner in Armenia, Foundation for the Preservation of Wildlife and Cultural Assets (FPWC) will use the grant (approximately £25,000) to preserve habitat for the endangered Caucasian Leopard.

This sub species of leopard is registered as Endangered on the IUCN Red List and has a total population of no more than 1,300. The Caucasian Leopard’s stronghold is in Iran, where it is known as the Persian Leopard, but in Armenia there may be as few as 15 individuals remaining.

FPWC will use the grant to strengthen existing research and monitoring of this little studied and endangered predator. Funds will also be used to restore degraded mountainsides with a programme to plant 4,000 trees and to develop sustainable tourism initiatives with local communities.

“Community development is a crucial cornerstone in our effort to protect the Caucasian Leopard.”
(Ruben Khachatryan, FPWC’s founding Director)

Thanking all supporters, Ruben Khachatryan, FPWC’s founding Director, said: “Community development is a crucial cornerstone in our effort to protect the Caucasian Leopard. In Armenia most villages located in remote mountainous areas suffer from extreme poverty, triggering illegal logging for firewood on steep mountain slopes, over collection of wild edible crops, unsustainable livestock grazing and, of course, poaching. These human activities destroy the habitat of the Caucasian Leopard and many other rare species.

“FPWC’s Rural Eco-tourism programme – as well as the reforestation measures – addresses these problems and we are more than happy that the grant will help us not only to intensify our research and monitoring of the leopard but also to develop new income opportunities for the local population.”

WLT has competed for grant funding via EOCA’s online polls in three previous years and this is the first time a project has been successful. Not only is it a great outcome for conservation in Armenia, but it makes the effort expended in 2014 and in previous years all the more worthwhile.

“We are absolutely delighted that Saving Armenia’s Leopard has won the grant, and a big thank you to everyone who took the trouble to vote,” said Mary McEvoy, WLT’s Conservation Programmes Manager, and a co-author of the bid. “The funds will be tremendously useful and the awareness raised by the vote means that hundreds if not thousands of people now know and care about the Caucasian Leopard.”

Saving Armenia’s Leopard was nominated for the EOCA poll by Nikwax, a member of EOCA and a WLT corporate supporter.

WLT has been supporting FPWC’s conservation work in Armenia since 2010. WLT provides funding for rangers in the Caucasus Wildlife Refuge from the Keepers of the Wild appeal. WLT is also raising funds for habitat conservation in the South Caucasus with a special appeal, Save the Caucasian Leopard.