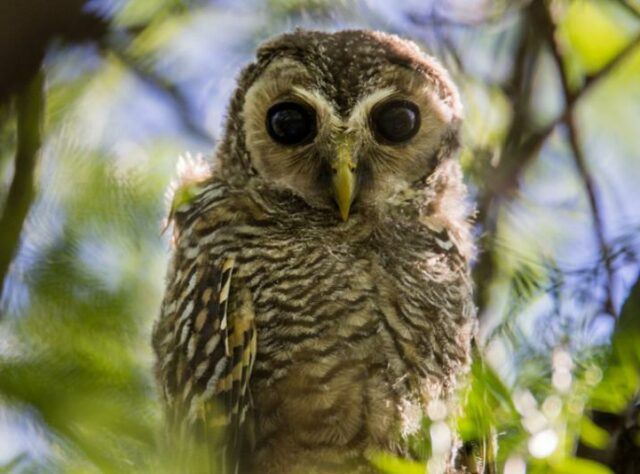 Roving Reporter Bethan John discovers what it takes to save a remote wilderness and biodiversity hotspot, home to one of the few groups of uncontacted indigenous people in the world.

The Gran Chaco encompasses the entire western half of Paraguay and stretches into Argentina and Bolivia. Widely considered the most inhospitable place on Earth, it makes up more than 60 per cent of Paraguayan territory, but less than 3 per cent of the population live here.

Historically, the Chaco was a refuge for indigenous hunter-gatherers and may still be home to a few groups of Ayoreo people, who avoid contact with the outside world.

It’s no mistake that these traditionally nomadic people have chosen this seemingly hostile and unforgiving land. The Gran Chaco translates in the Quechua language as ‘productive hunting grounds’ and, as the name suggests, it’s teeming with wildlife, a biodiversity hotspot, home to more large mammals than the Amazon.

But, the home of the Ayoreo indigenous people is under threat.

Sir David Attenborough, Patron of World Land Trust (WLT), described the Chaco as ‘one of the last great wilderness areas in the world’. Which it certainly was when he visited in the 1950s. But the question is: for how much longer? There is growing concern over the demands for land, made particularly by Brazilian ranchers and German Mennonite farmers (a fundamentalist Christian sect that moved into the Chaco in the 1930s).

These two groups now control nearly a third of the Paraguayan Chaco and carry out large-scale deforestation to create pasture for cattle-ranching, to grow soya for cattle feed or to cultivate crops for biofuel.

On an average day here, an area of forest the size of 1,500 football pitches is destroyed – wiping out an extraordinary habitat with a wealth of diverse wildlife. A previous government issued licenses that allow for 75 per cent deforestation, so much of the clearance is legal. Yet it’s essential that the large-scale illegal deforestation in the region is controlled, prevented and eventually abolished.

Urgent action is needed to protect this habitat for its people and wildlife. This is the challenge facing WLT and its conservation partner, Guyra Paraguay (Guyra).

In 2009, WLT and Guyra created the Campo Iris reserve, which protects more than 8,500 acres (3,440 hectares) and harbours the only seasonal lagoon in a wide area, making it a vital drinking spot for wildlife. Despite its importance in terms of biodiversity, the reserve covers a very small area when compared to the immense size of the Chaco.

In recognition of this, WLT and Guyra embarked on an innovative programme – Defending the Chaco – to conserve vast areas in partnership with Paraguay’s Ministry of the Environment (SEAM).

The partnership aims to strengthen the protection of three of Paraguay’s key protected areas in the remote north of the country: Defensores del Chaco National Park, Río Negro National Park and Cerro Chovoreca Natural Monument. Together these reserves measure more than 2.5 million acres (1 million hectares) – which is more than half the size of Wales – and conserve a significant portion of wildlife habitat within the Paraguayan Chaco.

While the reserve remains under the ownership of the Paraguayan Government, Guyra provides vital expertise in protecting and managing large protected areas. WLT plays its part by raising funds to employ rangers through the Keepers of the Wild programme to protect the area from illegal deforestation.

To return to the Ayoreo, if groups of indigenous people are to survive in voluntary isolation, they need vast tracts of wilderness home to thriving populations of wildlife. But illegal deforestation in their traditional hunting grounds is rife, destroying wildlife and the Ayoreo way of life – driving them both to the edge of extinction. And that’s another reason why WLT’s ongoing support for conservation in the Gran Chaco is so important.

You can help WLT support conservation in the Gran Chaco by making a donation to Keepers of the Wild.