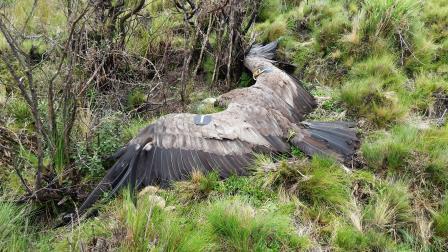 A young male Andean Condor has been shot dead less than a year after his release into the wild. The incident has shocked the international conservation community.

The condor, known as Felipe, had originally been rescued from captivity and then nursed back to full health by the Andean Condor Working Group. When fully recovered, Felipe was fitted with a satellite transmitter and then reintroduced into the wild.

Ironically, scientists used signals from the transmitter to find and recover the body. An X-ray examination revealed one bullet on the right leg and several bullet holes in the body.

Felipe’s release took place in July 2013 in Antisanilla, a condor sanctuary owned and managed by Fundación Jocotoco (Jocotoco), an Ecuadorian conservation partner of World Land Trust (WLT). The release was a collaborative effort, with input from the Environment Ministry, the City of Quito, The Peregrine Fund, Andean Condor Working Group and Jocotoco.

“Felipe was the first Andean Condor in Ecuador to have a satellite transmitter, and I had high hopes that he would provide information about what condors need to survive in the northern Andes,” said Hernan Vargas, Director of The Peregrine Fund’s Neotropical Science programme and a board member of Jocotoco.

Since 2012, The Peregrine Fund has been monitoring the condor population in Antisanilla, in collaboration with Jocotoco. Three nests have been located and monitored, and counts of condors are conducted every month to determine long-term population trends.

The plan is to tag with satellite transmitters every young condor fledged from nests in Antisanilla to see if the ‘bottle neck’ in the population is juvenile mortality caused by human persecution.

There are some 50 Andean Condors surviving in the wild in Ecuador, and of these as many as 30 roost in the high cliffs of Antisanilla. The species is listed as Near Threatened on the IUCN Red List, and in Ecuador the Andean Condor is Critically Endangered (and the national bird of Ecuador).

Felipe was the fourth Andean Condor to be shot and killed in Ecuador in the past 18 months. “This is a significant loss in a small population,” said Hernan.

While Felipe was alive researchers were able to study flight patterns and previously unknown roosting sites, information about the species that had never previously been collected in Ecuador. “Most of the roosting and feeding sites used by Felipe were located near but outside five protected areas suggesting the need to expand them in order to provide better security for the species,” said Hernan.

Since Felipe’s death the Ministry of Environment has committed to strengthening the collaboration with the Andean Condor Working Group. An agreed priority is to update the National Strategy for the Conservation of Andean Condors. Another objective is to increase the number of park rangers in protected areas to participate in surveys of Andean Condors and to patrol selected sites that are important for Andean Condor conservation. Also on the agenda is a plan to finance and implement a national education campaign.

Ecuador’s Ministry of Environment is working with national police to track down the perpetrators.

You can support FJ’s ongoing protection measures for Andean Condors by donating to WLT’s Action Fund. Please put ‘condor conservation’ in the comments box on the donation form.