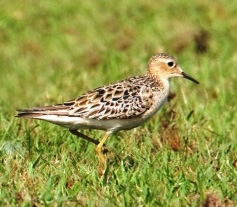 Birdfair has made its largest ever donation – £270,000 – to BirdLife International to support Birdlife’s conservation programme for migratory birds in the grasslands of the Americas.

The donation, made in Birdfair’s 25th anniversary year, will support BirdLife’s Global Flyways Programme, which is protecting birds that breed in the prairies of North America and then overwinter in the pampas grasslands of South America.

“For 25 years, the Birdfair has funded and helped promote the Birdlife Partnership’s work around the world. The £3.34 million Birdfair has raised over those 25 years has been used as start-up funds for so many innovative projects and ideas that its legacy is so much greater. There is no doubt that the event has become a major force for conservation,” said Dr Marco Lambertini, BirdLife International’s Chief Executive, on receiving the donation.

One of the migratory birds to benefit from the Flyways Programme is Buff-breasted Sandpiper (Tyngites subruficollis), which is found at Barba Azul, a nature reserve supported by World Land Trust (WLT) in Bolivia’s Beni savanna.

Registered as Near Threatened on the IUCN Red List, the migration path of the Buff-breasted Sandpiper spans much of the American continent. It breeds on the Arctic coast of North America and then flies south via Bolivia’s Beni savanna to overwinter in the grasslands of Paraguay, Uruguay and Argentina. From there the Buff-breasted Sandpiper completes its migration by heading north to its breeding grounds via the Colombian Llanos.

In 2014 Birdfair will raise money for BirdLife’s Marine programme to protect the world’s seabirds, which are more threatened than any other group of birds.

Birdfair funds will support BirdLife’s work with national governments and international bodies to create a network of marine protected areas. Building on BirdLife’s existing work in mapping marine Important Bird and Biodiversity Areas, a network of marine protected areas is essential if the international community is successfully to protect 10% of marine and coastal areas by 2020, the target agreed by the Convention on Biological Diversity.

Birdfair is the world’s largest wildlife event. It held annually at Rutland Water for three days in August. World Land Trust is a regular exhibitor. Come and see us in Marquee Four.