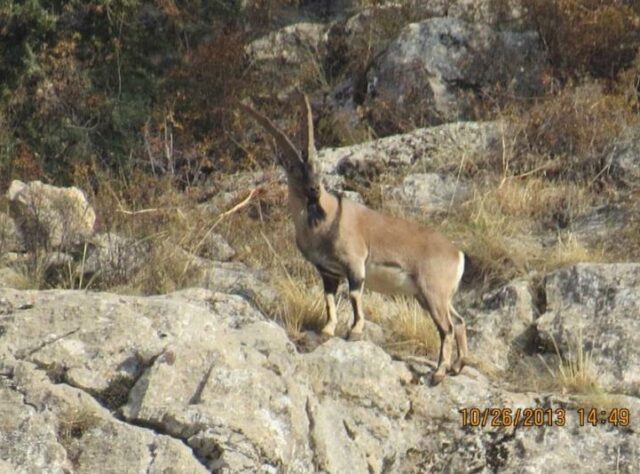 Despite extreme temperatures, rangers employed by Foundation for the Preservation of Cultural and Wildlife Assets (FPWC) with support from World Land Trust (WLT) continued to monitor wildlife throughout the winter of 2013/14 in the Caucasian Wildlife Refuge.

Temperatures plummeted to -27 degrees centigrade and at high altitudes there was up to three metres of snow. But, despite limited visibility, there were regular sightings of Bezoar Goats throughout the winter.

Whereas a year ago in 2012, rangers would record 23 individuals at the most in one herd during the mating season, by the end of November 2013 a herd of 40 individuals headed by a huge Bezoar buck had been recorded. Bezoar Goats are now seen just 500-1,500 metres from the ranger station.

More wolves were seen during the winter: wolf populations are a sensitive issue as they sometimes attack domestic animals. Meanwhile, an unwelcome surprise in January came from a husk (the collective in this instance) of hares, short of food, attracted by the newly planted saplings. On the advice of WLT, FPWC rangers created mesh tree guards for the trees but the hungry hares did manage to get to some of them before the saplings were protected.

The rangers continue to patrol the area round the clock and later in the year FPWC will hire a fifth ranger for better protection of territories. No poaching was recorded: during heavy winters hunters avoid the mountains for fear of avalanches.

For a fuller report of ranger activities in the Caucasus Wildlife Refuge through the winter of 2013/14, see Wildlife monitoring continues through the Caucasian winter »

WLT provides funding for rangers in the Caucasus Wildlife Refuge from the Keepers of the Wild appeal. WLT is also raising funds for habitat conservation in the South Caucasus with a special appeal, Save the Caucasian Leopard.